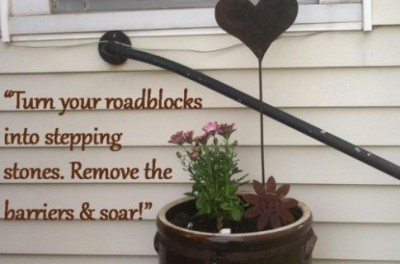 A merry heart doeth good like a medicine: but a broken spirit drieth the bones.” Proverbs 17:22

Reflection:
Have you ever noticed how procrastination turns an ordinary task into an impassable mountain? The longer you wait to do something that you need to do, the more likely your opinion will shift about this project. For example if you needed to paint a room, it might seem like a boring, one-day task. The longer you wait to get started, the more you dread the project. Soon instead of thinking about the task as a one-day painting project, you start to think about the job as a day of painting the room, a day of painting trim,  a day of painting touch-up. Now, you don’t want to attempt the task until you have a three-day window because it seems so much bigger. You hate the idea of giving up an entire three-day holiday weekend, but you decide you better wait for one instead of starting the job this weekend like you had planned.

Not only can procrastination change the feel of a job for you, but it can also change the scope of the project. Let me explain. Imagine that you really needed to wash laundry, but you dreaded the task so much that you couldn’t get started. The two loads of laundry you had grew to four loads, and the four loads grew to eight loads. Pretty soon, you would have more laundry than was physically possible to wash in one day.

If allowed, negativity will dictate behavior patterns. It will lead us from putting a task off to absolutely dreading and completely ignoring the project. Negativity leads to failure and frustration.

Challenge:
We’re going to tackle this problem today. First identify three things you need to do. Then beside each item, write two to three reasons why you haven’t done the project. Once we recognize what is holding us back, we are going to shift our thinking. Change your negative roadblocks into positive stepping stones.

One of the greatest reasons for failing to begin a project is that there is not enough time to complete the project in one setting. Instead of looking at the whole project, break it down into smaller, more manageable segments. Using our previous idea of laundry, I will show you how this works.

Step One: Identify need.
I really need to catch up on washing laundry.

Step Two: Recognize two roadblocks.
I don’t have the time to wash all the laundry today.
I don’t want to start something I cannot finish.

Step Three: Change roadblocks to stepping stones.
Instead of seeing the laundry as one task, I’m going to break it down by load. I need to wash, fold, and put away five loads of laundry: one of darks, one of lights, one of reds, one of sheets, and one of whites.
I have three hours, which gives me enough time to wash, fold, and put away two loads of laundry. With the time I have, I will complete the whites and the darks.

Encouragement:
Now it’s your turn. Today is your day. Turn your roadblocks into stepping stones. Remove the barriers and soar! Let go of failure, and embrace the watershed moment!

What are some of your roadblocks? How can you change them into stepping stones?

Heidi Lynn has a passion for women's ministry and can be found writing at Chronicles of a New Creation. Heidi believes that as Christian women, we were created to serve our families, our churches, and our communities. With this calling in mind, she writes and speaks about organization in homes, families, and spiritual lives.
Previous PG-13 Movies: The Truth Behind The Rating
Next Hey You! Mr. Knight in Shining Armor