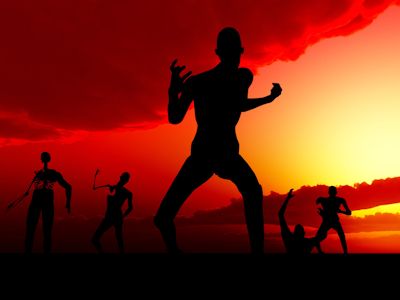 Zombie mania has been rampant lately. In fact, I remember back in the day when I was a fourth grader and Michael Jackson’s Thriller was released. Everybody was getting into the zombie scene. Friends, it has hit again and it is a lot worse. So why do I care? I care because it’s out of control and when teens get involved excessively with acting like zombies, they can cross over into a dark world that can create symptoms such as a depression and laziness.

You see, I was brought up believing that a person will act in accordance with how they dress. Put some nice suits on a group of teens, bring them out in public, and the majority will probably act decently. Now if you dress them up in monkey suits, they’re going to go bananas. The same thing applies with dark clothes, black lipstick, dark fingernail polish and the works. Accessorize like a zombie and you’re going to act like a zombie. Eventually you’ll probably even feel like a zombie.

In addition, I believe there needs to be caution taken when anything dark is present. I’m not saying it’s wrong to have a black automobile or purse. I’m saying clothes, video games, movies, posters on the bedroom wall, and the like. These things can affect mood, attitude, and even relationships. So what does the Holy Bible say about darkness? Two scriptures come to mind:

John 1:5 And the light shineth in darkness; and the darkness comprehended it not.

First, when something is going down a dark path, that which is light becomes hard to comprehend. The more you indulge in darkness, the more confusing life is going to become. For example, if you listen to music that has a very dark-orientation, it’s going to make you feel rather grim. On the other hand, if you listen to music that is positive and cheerful, you’re going to be positive and cheerful. Listening to that positive music makes it easier to comprehend how to actually live a positive lifestyle.

Matt 5:16 Let your light so shine before men, that they may see your good works, and glorify your Father which is in heaven.

The second thing I want to take from the Holy Bible is the importance of letting our light shine before men. Could you imagine your pastor coming to church every Saturday or Sunday to preach dressed as a zombie. You probably wouldn’t take him very seriously. Of course, you expect him to present himself with light. This doesn’t necessarily mean wearing a suit and tie, but certainly not as an undertaker. So, present yourself in a way that allows your faith to shine. This will help you project your faith properly towards others.

Friends, whether we like it or not, impressions do matter. Sure, it’s not always necessary to dress up and I’m not telling you to. God loves you whether you’re dressed in ripped clothes or a tuxedo. What I am trying to tell you is that you’ll see that people tend to appreciate you more when you dress in light and act accordingly. So teens, cut it out with the black hair dye, lipstick, and fingernail polish. And while you’re at it, dress in a way that let’s your light shine. This will make it easier to share the Gospel of Christ, and you may even notice a change in how you feel. Thank you for reading and God bless.

Joel M. Bauer is a 45-year-old U.S. Army Veteran from Dunn, NC, which is just outside of Raleigh. After being honorably discharged from the U.S. Army, he attended school at Taylor University, a Christian liberal arts school, in Fort Wayne, IN, where he received his BS in social work and psychology. He has worked in such places as a homeless shelter, a community based treatment center for severe mental illnesses, a school for troubled students, and other social service agencies. His current endeavor is to build The Bottom Line website into a site that inspires both Christians and non-Christians alike, and brings glory to God.
Previous Senior High and Senior Citizens: the day we bridged the church generation gap
Next Small Book With Big Truths