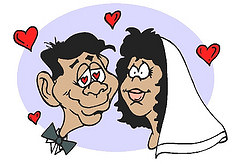 “Here comes the bride…here comes the bride.” So sings the familiar tune that ushers in the bride at most weddings. As the bride approaches, the groom waits patiently—sometimes nervously. Nevertheless, the marriage knot is tie thus uniting the two as one. Then the plot thickens. Those two, the bride and the groom, aren’t the only individuals who are joined together as one. Two families must now unite to form a whole. And so the “In-laws” are born!

In-laws do not only refer to the parents of each spouse, but it’s inclusive of other family members. Depending on the ones you get, in-laws can be a blessing or a curse. In some instances they are a combination of both. With that being said, here’s a warning. Never underestimate the impact that in-laws have on the matrimonial unit. Though it shouldn’t be, their influence can cause a marriage to fail or flourish. The attitude, personality, and intentions of in-laws can determine whether a couple grows in delight or distress; happiness or heartache. It makes sense to be open to this reality, rather than to be blind-sided.

If you happen to be in a union that produces awesome in-laws, then stop what you’re doing and offer up a prayer of thanksgiving.
On the other hand, if you’re in a union that comes with trying in-laws, now is the time to pull out the heavy artillery found in Galatians 5: 22-23. “The fruit of the Spirit is love, joy, peace, forbearance, kindness, goodness, faithfulness, gentleness, and self-control.” If oneness is to ever exist in dealing with those kinds of in-laws, the fruit of the Spirit has to be employed. Although no one fruit is more important than the other, I’m tempted to say especially “Self-control.”
There are varying degrees of problematic in-laws, and by no means is this list exclusive. They are the:

The drama increases and the misery worsens when one couple have to deal with a combination of these difficult in-laws. If they are not approach with caution and tactic, the result can be disheartening. Couples need to avoid a thug-o-war, so taking sides is not a feasible option. What’s best is seeking God’s advice through prayer, then use His guidance to come to a unified decision. “Therefore a man shall leave his father and his mother and hold fast to his wife, and they shall become one flesh.” (Genesis 2: 24) If needs be, seek a neutral mediator. As you try to cope remember to accept the fact that though in-laws will not convert overnight, awesome in-laws are not a myth.

Amelia Brown is from the beautiful island of Jamaica. She is a 28 year old Guidance Counselor by profession, but a passionate writer at heart. Most of her articles written are aimed at stimulating positive change under the guidance of the Holy Spirit. She is also a published poet and a member of Faithwriters. Outside of writing, she enjoys volunteering, cooking, and turning frowns right side up. Amelia currently lives in New York.
@ameliambrown
Previous A Day at the Playground
Next Is The “Prosperity Gospel” Legit?