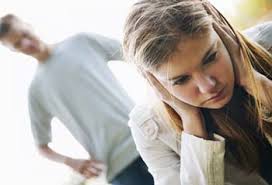 The Bible is very clear on the issue of an unbelieving spouse.  The apostle Peter, in his letter to the churches in Asia Minor, says, when speaking about marriage to a non-believer, “Wives, in the same way submit yourselves to your own husbands so that, if any of them do not believe the word, they may be won over without words by the behavior of their wives, when they see the purity and reverence of your lives” (1 Peter 3:1-2).

Ten years ago I became a true believer and began to pursue Christ in earnest.  I purchased a copy of the New International Version of the Bible and began to read the Bible for the first time.  I listened daily to several radio programs of different ministers and sermons.  I started going to church and praying.  All of this was an about face for me and how I had lived my life up to this point.

I listened to a sermon about spiritual warfare and the ways Satan comes after us and how he acts, and it was a good thing.  Pursuing Christ caused a great uproar in my home.  In the aforementioned sermon, the pastor said, “You know it’s Satan when the opposition is outrageous.”  All Hell was breaking loose at home.  First there was a fight about even bringing a Bible in the house.  Night after night, it went on and on.  My friend at work advised me to “stand in the gap for [my husband], and claim him for Jesus.”  Night after night, fight after fight, I went into my bathroom, shut the door and claimed my husband and family for Jesus.  Every fight I fought back in the spirit realm.  And I took the words of Peter to heart, hoping he would see Jesus in me and want Him too.  Fast forward two years and my husband became a believer too!

My husband is a changed man and I am a changed woman.  We have been following God a long time now, but Satan never stops trying to steer Christians wrong.  He will be after us until we die.  But for now, he is working, and we are not always clever enough to catch him at his game.  Sunday mornings are a favorite time for his tricks.  There have been many strained moments before church.  Some days I only make it because the drive is short.

This Sunday was no exception.  Again, the conversation was ridiculously senseless.  For example, I asked him if he had gotten his W-2 from work.  He went into a tirade about if he had gotten it he would have given it to me; what did I think? That he threw it away?  I knew if I could get past the drive, most likely all would be fine.  I know it’s Satan, but sometimes I think it would be nice if my husband realized it and didn’t give in so easy.  It gets tiresome.

As we were standing and singing during the worship time, I was talking it over with God, asking for some help, pleading my case.  And the Lord said to me, “Are you going to give him up to Satan?  Or are you going to intercede?”  I thought of how much I had prayed for him to be saved.  That was all it took for me to go from hurt to loving, and I put my arm through his and held his hand.  He turned to hug me and said he was sorry.  I said, It’s ok.  And it was.  If you have some spousal discontent, I can understand.  Perhaps you will ask yourself next time that happens, “Am I going to let him/her go? Or I am I going to intercede and love him/her instead?”  Satan is a clever deceiver, but with God’s Spirit to guide us, we shall not be moved.  He cannot win when God steps in.