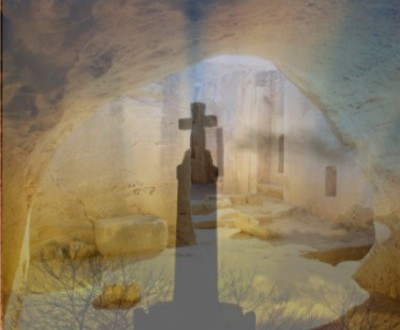 Imagine you are among the multitude gathered around the tomb of Jesus. Sobs fill the air as many mourn the loss of their dearest Friend. Some whisper to others, sharing their memories and their grief. Yes, I’m sure there were many tales surrounding the tomb.

Mary, the mother of Jesus – I still remember the night the angel came to me. It seems like just yesterday he told me that I would bear a son and that His name would be Jesus. I was overjoyed and, at the same time, frightened. I believed the angel even though I didn’t understand how it was possible. Me, the mother of the Messiah. I knew who He was and what He was destined to become. Even as I held Him in my arms, I knew He had a higher calling. But what I never knew was how difficult it would be to say, “Goodbye.”

Martha – We had our ups and downs, but Jesus was the dearest Friend I had ever had. I know that the times it seemed He was hard on me, He was only trying to help me. He was guiding me to do the right things. I didn’t get it at first. I was so full of anger and bitterness that I didn’t see His love and mercy. Then, when my brother, Lazarus died, I had a choice to make. Would I let the bitterness continue or would I trust that Jesus knew best? I made a decision, but nothing could have prepared me for what happened next.
Lazarus – I wish I could tell you what it was like to be dead for four days and then to live again, but there are some things that just can’t be described. Standing there in the graveyard that day, I’m not sure I fully understood what was happening. People were standing all around me. Some were laughing while others were crying. Some looked as if they were ready to faint. Mary and Martha filled me in on what had happened. They even told me of their initial anger and confusion over Jesus having been so late. Looking back, I’m sure they’ll agree that He wasn’t late at all. He was right on time.
Mary of Bethany – So many of His followers just didn’t get it. Even His disciples didn’t seem to grasp what Jesus had told them over and over again. But I understood. I knew why He had come. I comprehended His sacrifice. We didn’t have long. There wasn’t much time to spend with Him. That’s why I took every opportunity I could to be with Him. I know it made Martha angry, and for that, I’m sorry, but I just had to be near Him. I needed to hear the hope He had to offer. Finally, it occurred to me that I needed to give Him something in return. I went to my room and grabbed my most precious possession. It was special. It was costly. But I could think of no better use for it than to anoint my Lord. He could carry the scent with Him, and with His dying breath, He could be reminded that He was loved.
Barabbas – I’ve seen a lot of people in my time. Good people, bad people, and people who didn’t know the difference. But I had never seen anyone like Jesus. I can’t really put my finger on it, but there was definitely something different about Him. I noticed it right away. I was thrilled when I heard the people shouting to set me free. I couldn’t believe it. I was ready to die, but somehow, I was instead set free. Then I saw the One who was to die in my stead. He didn’t look like a criminal, and when His eyes met mine, I saw such love. It’s as if He were saying, “Pay attention, Barabbas. You’re the one I’m dying for.”
Joseph of Arimathea – I’d been a disciple of Jesus for quite a while, actually. I just couldn’t let anyone know. After all, I was an esteemed religious leader. What would people have thought if they knew I was in league with the Messiah? What would the Pharisees have done to me? I feared ridicule. I was afraid of being an outcast. I didn’t want to lose everything that I had worked so hard to gain. But when I saw Jesus hanging on that cross, everything changed. Suddenly, I didn’t care who knew that I was a disciple of His. I finally realized that there was so much more than worldly gain. That’s why I went to Pilate and asked for the body of Christ. I knew I was putting myself and my family in danger, but more than that, I knew that I owed it to Jesus. It was the least I could do. He carried me away from the bondage of sin. It was my turn to carry Him.
Peter – I don’t know what to say. I’ve failed Him so many times, but still He forgave me. He never gave up on me. He continued to help me and to teach me. He knew I wasn’t worthy of His time and attention. After all, look at how I abandoned Him … how I denied Him. I never had the chance to tell Him I was sorry. I didn’t mean to do it. I was afraid and confused. It’s no excuse, I know, but if I could talk to Him now, I know what I’d say. Yes, if He were alive, I would serve Him once again, and this time, by His grace and not my own strength, I would stand with Him. I would be a disciple He could be proud of … if only He were alive.
What is your favorite tomb tale?

Dana is a full-time Christian author and speaker residing in Greenville, SC with her husband and two dogs. In fulfilling her call to evangelize the lost and edify the saints, Dana spends her days writing devotions, devotional books and books for children, as well as recording podcasts on various Biblical topics. She serves in many capacities at her local church, including the roles of church pianist and ladies' Sunday School teacher. Dana has a passion for souls and longs to be used of God in whatever way He deems necessary. When not writing or serving at church, Dana can most likely be found reading or hiking a nearby trail.
Previous Arise and Shine–Expectantly!
Next King David, Peter and You–God Uses the Unqualified