Breaking News
Home / Featured / A Christian Teen in Turkey: “I took so many things for granted!” 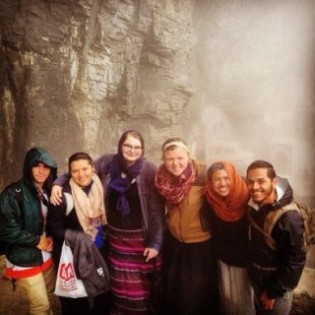 One teen's eyes were opened after a recent trip to Turkey.

A Christian Teen in Turkey: “I took so many things for granted!”

Mikaela Bender (pictured third from right), a teen with a call to missions, granted this interview:

Q: Where did you go to and for how long?

Recently I went on a mission’s trip to Turkey for three weeks. We spent one week in the major cities of Istanbul and Izmir, and for the last two weeks traveled east to the mountains.

Q: What was the purpose of the trip, and what were your expectations before you left?

The purpose was to build and begin relationships there. There were no expectations because we were in a country where we couldn’t evangelize. We couldn’t say the name of Jesus, and so we went as tourists. This consisted of walking the streets praying for God to put someone in our path. He never failed to bring us what the local missionaries there call “a divine appointment.”

Q: Did the experience open up your eyes to seeing new things?

It changed my perspective on so much. I’ve been a lot of places on mission trips but this wrecked my idea of missions and the persecuted. I’d never felt so restricted, and I’d never experienced so much spiritual warfare. For example, we would walk around praying for a divine appointment and then someone would always eventually, randomly come up to us and want to talk. So we would get a meal or tea with them and just talk. Once they brought up Jesus or Christianity we could start to talk about that. But without fail every time someone got to that part of the conversation they would get interrupted by a neighbor or a phone call. So when we got to talk with someone, the people in our team who were not part of that conversation would constantly be praying for no interference from the enemy. I have never ministered anywhere where there was such a real tangible evidence of the enemy fighting for people to not hear the truth.

The hardest part was being restricted as a woman in a closed country. We had code words for everything biblical or remotely close to Christianity. We also had many restrictions on us as women and what we could do or say, especially in more remote areas. The highlight was the more lax city standards, which caused college-aged students to be interested in what we had to say. They were open to the idea that the religion they based their lives on might not be the way.

Q: I’m always impressed with Jesus’ interaction with women in the gospels. He appeared to women first after His resurrection, and it was to a woman that He first openly revealed Himself as Messiah. Being in a nation which was not founded on Judeo-Christian principles, what do you notice about the attitude, role, and status of women?

Being a woman in a Muslim-based community was very different. In the more rural areas, women are supposed to stayed covered. We were instructed to look down when walking outside. We had to walk behind the men. To look up would allow eye contact with men which was implying a lot more than a glance. We were not supposed to speak in public unless we were spoken to and when we went into restaurants we sat at a different table than the men. Some restaurants were only for men and so we would have to keep walking to find one we could all enter. They were allowed to play card games; we were not. Men were not allowed in the kitchens, so we found that each morning and evening preparing meals became a free, comforting place for women to express themselves. It was hard to live like that for only a week. We felt so much love and compassion for the women who were raised in those restrictions.

Q: Was there anything you took for granted about life in America that you appreciated more after being in another culture?

Besides the restrictions on women I took for granted my right to worship, to say the name of Jesus, to meet with fellow Christians without fear, to live in a country that allows freedom of speech. The local church had received multiple threats. Open Christians lost customers at their businesses, and college students who were peacefully protesting were tear-gassed in the streets. I saw these things and experienced some of these events and was slightly afraid. But the local Christians had no fear; they had counted the cost and it was all worth it.

Q: What would you say to young people–or anyone for that matter–who have thought about getting involved in outreach on some level, but have put it off for one reason or another?

Don’t be afraid and don’t waste time. If you’re not called to go, then give; these missionaries who are living in these places need support. The young people in the Middle East are ready and wanting to hear. People everywhere are so ripe for the Harvest. We just need people to go, to give, and to pray and intercede.

*Shortly after conducting this interview, Mikaela left for Zambia, where she is continuing to live out her call to missions.

How does Mikaela’s experience challenge you? Have you taken a missions trip that changed your world?

Emily Tomko's radical encounter with the Lord while at a nightclub changed her life forever and inspired her first novel, College Bound: A Pursuit of Freedom. She is the author of seven books, including 31 Thoughts on Prophecy and Leaving the Shallows: igniting the faith that overcomes the world. Her tastes tend toward vintage and she's a Germanophile, having spent a year in Bremen and Nuremberg. Emily loves the scriptures and writes with fierce compassion and a deep desire to see people freed from the miry clay of this world and walking in the truth.
Previous Be That “Someone Else”
Next Evangelism In Our Public Schools