Breaking News
Home / Featured / Are Grandparent Rights Part of the 5th Commandment to Honor of Fathers and Mothers? 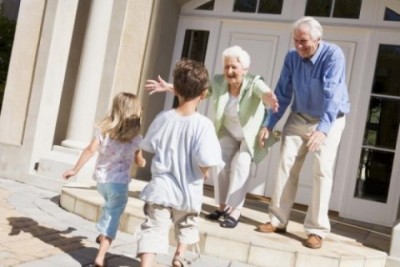 Are Grandparent Rights Part of the 5th Commandment to Honor of Fathers and Mothers?

The family is a blessing from God and we are dismantling it step by step. Like the results of removing of pieces in a game of Jenga, the family will collapse with lack of support. There are many types of families. So many types, in fact, that our ‘true’ family – our blood relatives is gradually becoming nothing more than co-habitants in a household.

Marriages dissolve daily leaving children as wandering nomads between two clans. They have just a bit of an advantage over the increasing number of children whose parents had no desire to commit to marriage at all… or those who do not even know who their father’s name. Then there are parents with addiction problems who routinely put their habit before their children… then lose them.

Are the children still expected to honor these parents? …Yes.

Rebellious grown children sometimes use their children as pawns to manipulate their own aging parents. They can refuse to allow a relationship in retaliation, for no other reason than to be spiteful. Grandparents, too, can manipulate their grandchildren in an effort to undermine parental authority.

Does God expect the young children to honor and respect their parents and their grandparents? …Yes.

Does God expect children to honor and respect their mothers and fathers when they are adults living on their own, independently of their parents? …Yes.

Leviticus 19:3 “Each of you must show great respect for your mother and father, and you must always observe my Sabbath days of rest. I am the Lord your God.” NLT

There are countless numbers of grandparents today living with broken hearts because they are restricted from seeing the grandchildren that they so looked forward to having one day .

Each state has its own version of ‘Grandparent Rights.’ Most states do have a provision for grandparent custody or court ordered visitation. Some states have given the court the authority to rule in favor of a grandparent. They could also have the power to restrict all contact. Such decisions can be made based on nothing more than a stranger’s (social services agent) testimony on whether or not it would be in ‘the best interest of the child.’

Due to our rebellious, self-serving nature, we can take them for granted and refuse to obey the command God has given us. Our rebellious nature causes us to seek out the state’s assistance in order to resolve family conflict. How naive and foolish we are to relinquish such personal issues to the government.

My prayer is that God will call hearts to obedience so that broken family relationships may be restored.

Melinda is currently the worship leader at her small church in rural America. Married for 23 years, she and her husband Larry have one son. She is the Director of Mailing in the print/mailing industry by day and freelance author by night. Her desire to write is a passion borne from tragedy. God used it to take her faith to a much deeper level. Melinda is a freelance writer and member of FaithWriters. She joined the TBL team in March 2014. Believing we are citizens of a greater ‘kingdom,’ her articles for The Bottom Line examine governmental responsibility, citizen involvement and current political topics. With the great wisdom contained in scripture as her guide, she looks at today’s political environment from a Biblical perspective. She prays her words will prompt the reader to view citizenship - and every aspect of their life, through the eyes of faith. Col 3:17 To read more of Melinda’s writings on her faith, hope, and life visit her blog Still Living Still Loving or her page at Faithwriters.com. You can also follow her on Twitter @MKZbk.
@@MKBzk
Previous Called to be a servant of God
Next Children Of Same-Sex Partners Are Speaking Out