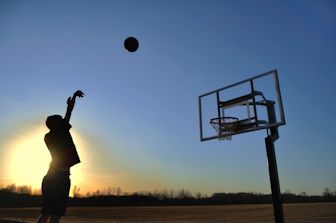 Austin Gutwein was an average nine year old until one day in grade school when he watched a video on AIDS orphans in Africa. He learned that 2,057 children of parents with AIDS would become orphans in one day, while he was at school. According to the United Nations every 14 seconds a child is orphaned by this disease. He began thinking what it would be like to have no parents.

For some people having a vision for your life begins at a very young age. Such is the case with Austin. Though not accepted by his school’s basketball team he loved the sport. A dream was planted for using basketball to help these orphans. On World AIDS Day in 2004 he shot one free throw for each of those 2,057 orphaned children. Through sponsors he raised almost three thousand dollars which was used by World Vision to help eight of those children. At the age of 12 he had a dream of building a school in Africa. He authored his first book at 15. He currently is a student at Anderson University majoring in political science and economics.

Austin is the founder of “Hoops Of Hope,” a ministry which sponsors basketball camps and free throw tournaments, which have become the largest event of their kind in the world, involving 40,000 people in over 25 countries. These shooting marathons have raised over three million dollars for the construction of educational and medical facilities, food, and various water projects, all of which benefit AIDS orphans.

This young visionary was selected in 2009 to be in the top ten of the most “Caring Americans.” He speaks to large audiences every year, encouraging his listeners to “take their best shot and do something bigger than themselves.” Austin Gutwein is an example for every child that they are not too young to have a dream. In his words, “People think that kids can’t make a difference and that they should wait until they are older, but that is totally wrong.” One thing is for sure. Thousands of AIDS orphans are benefiting from the vision of this young man. He is making a difference in their lives. One more free throw is one more life changed.

It goes beyond helping orphans. The basketball ministry based in Colorado Springs is combining basketball with evangelism. It is bringing “spiritual orphans” into God’s family of believers.

John Livingston Clark is 67 years of age and lives in central Washington State. He has written two published books, and two published poems. His initial book is called, " God's Healing Hope: Breaking the Strongholds of Wrong Thinking." His second book, released in December of 2016, is a motivational book written to seniors titled, " Seniors: Are You Retiring or Recharging?" Both books are available on amazon. You can also view his writings on www.faithwriters.com. John is available to speak on a variety of topics. Visit me at jclarkministries.com
Previous Praise and Worship
Next Singing Sensation: Sam Santiago