Breaking News
Home / Featured / Integrity Needed – Could You Be The One? 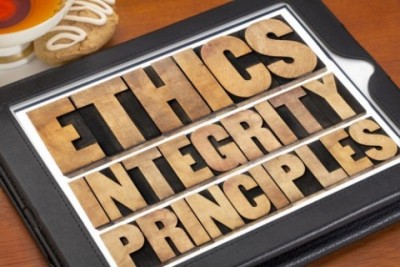 Integrity Needed – Could You Be The One?

We are fast-approaching that time of year again. The time when candidates fill our mailboxes and we get bombarded, over the airwaves, with ‘approved messages.’

America needs leaders who are of honorable character. It is up to us whether we will demand it or not.

Amos 5:15 Hate evil and love what is good; turn your courts into true halls of justice. Perhaps even yet the Lord God of Heaven’s Armies will have mercy on the remnant of his people. (NLT)

Perhaps, but I can’t help but wonder if He should. We have pushed God so far out of our lives that our society has descended to a place where holiness is mocked and evil is glorified. Instead of honesty, humility and servant-leadership, we see greed, deception, and lust for power and status. We see our elected officials and those speaking for them, behaving like spoiled children not willing to give up their position on the team. Regardless of what will benefit team USA.

Cleaning house and kicking them all out, is what some believe to be the solution. But would it really serve the intended purpose? Term limits are another way to keep the lifer’s from settling in. However, constant turnover can be problematic as well? In many cases the experience may be critical to recognizing problems and resolving or preventing them.

We have two major political parties. Each one has a select group of people running the show. An elected official may go to Washington with sincere intentions and  a genuine belief that they can change things. Yet many slowly become part of the very problem they went there to solve.

The problem is not an issue of longevity in office. It is an issue of integrity in office. The financial deficit is not the only deficit our country faces. Why would someone volunteer to be thrust into such a cesspool? And if elected, can a person of genuine integrity have the strength and ability to govern a nation that suffers from a severe integrity deficit? It will certainly take a greater  power than their own.

Proverbs 2:7  He grants a treasure of common sense to the honest. He is a shield to those who walk with integrity. (NLT)

To restore overall integrity in office, we must first restore a desire for it among the citizenry. We must gather as much information about the candidates as possible and elect integrity to public office. Voters must take the privilege of electing their government officials seriously and pray for God to call honorable people to fill this need – and that He equips them for the challenge.      Listen… could He be calling you?

Psalm 119[a]
1 Joyful are people of integrity,
who follow the instructions of the Lord.
2 Joyful are those who obey his laws
and search for him with all their hearts.
3 They do not compromise with evil,
and they walk only in his paths.  (NLT)

Melinda is currently the worship leader at her small church in rural America. Married for 23 years, she and her husband Larry have one son. She is the Director of Mailing in the print/mailing industry by day and freelance author by night. Her desire to write is a passion borne from tragedy. God used it to take her faith to a much deeper level. Melinda is a freelance writer and member of FaithWriters. She joined the TBL team in March 2014. Believing we are citizens of a greater ‘kingdom,’ her articles for The Bottom Line examine governmental responsibility, citizen involvement and current political topics. With the great wisdom contained in scripture as her guide, she looks at today’s political environment from a Biblical perspective. She prays her words will prompt the reader to view citizenship - and every aspect of their life, through the eyes of faith. Col 3:17 To read more of Melinda’s writings on her faith, hope, and life visit her blog Still Living Still Loving or her page at Faithwriters.com. You can also follow her on Twitter @MKZbk.
@@MKBzk
Previous Do-Overs
Next Don’t Buy What They’re Selling