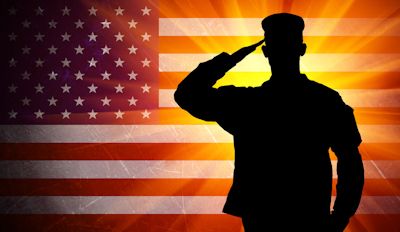 Our Veterans Young and Old

Here are two stories about veterans spanning the younger and older generations. Army Corporal Ethan Laberge was severely wounded in Afghanistan by a suicide bomber which killed two of his buddies. Shrapnel disabled his legs and right arm. He so far as gone through 10 surgeries. He also suffered memory loss as a result of brain trauma.

Recently, some wounded soldiers were picked from a “lottery,” on which something would be bestowed as a token of appreciation for their service to America. One of the people selecting a wounded veteran was Jay Leno, who hosted the “Tonight Show” for 17 years. He happened to choose Corporal Laberge. Jay has always been known for his big heart toward veterans. He was about to prove it in a big way. He took the soldier for a ride in a 2015 Dodge Challenger SRT Hellcat, considered to be the fastest and most powerful car on the market with a horsepower of over 700. At the end of the ride the corporal said, “That was awesome…I wouldn’t mind having one of these.” What was Jay Leno’s response? “It’s yours…America loves you. Thank you buddy…” Then Jay handed over the keys to him.

Now here is the story of another soldier with the nickname of Jay, but this veteran is 98 years old. Master Sergeant Justin Belfield was not injured in battle, but he lived at the Baptist Health Nursing and Rehabilitation Center in Scotia, New York. This veteran fought in the Battle of the Bulge in World War II. He has worn his army uniform every Veterans Day since living at the rehab center. On Veterans Day, 2014, Sergeant Belfield sensed he was near death and wanted to wear his uniform one last time. Even though he was unable to get out of bed, the staff dressed him and one of them whispered, “Happy Veterans Day.” He gave a slow but meaningful salute. Every day he had said, “Thank you, Jesus, for another day,” but that would be the last. The very next day he died.

These two young and old veterans have given reasons for why we should not forsake our men and women who have defended freedom. In a time when the United States government has not given them the due respect and esteem they so deserve, people like Jay Leno and those at the rehab center in Scotia, New York, have made sure they get recognized. Even though Veterans Day has come and gone for this year, we can celebrate our freedom every day because of the men and women in the military.

John Livingston Clark is 67 years of age and lives in central Washington State. He has written two published books, and two published poems. His initial book is called, " God's Healing Hope: Breaking the Strongholds of Wrong Thinking." His second book, released in December of 2016, is a motivational book written to seniors titled, " Seniors: Are You Retiring or Recharging?" Both books are available on amazon. You can also view his writings on www.faithwriters.com. John is available to speak on a variety of topics. Visit me at jclarkministries.com
Previous Custom Made Christianity
Next THERE IS ALWAYS SOMETHING!