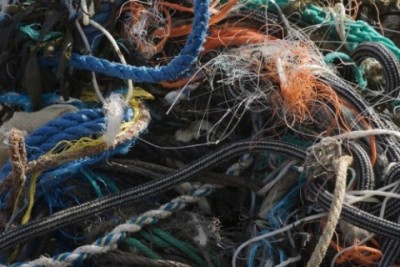 Last week,  a humpback whale was sighted by a fisherman off the Faralon Islands.  She was bound up in all types of fishing lines.  Time was of the essence as she was having trouble staying afloat.  Arriving several hours after the radio for help went out, the rescuers went to work in the water beside the whale. She was so weighed down that they determined the only way to help her was to dive into the waters with her and cut off the myriad of ropes and lines.  It was a dangerous decision since one slap from her mighty tail would have meant a death blow.  After hours of cutting, untangling and pulling, the last line to go was the one through her mouth.  The diver cutting that rope said she kept her eye on every move he made.  Finally, she was free.  She reportedly swam in what seemed to be circles of celebration. Then, she returned to each and every diver and gently nudged each one in what seemed to be a spirit of thanksgiving.  Some divers described this experience as “life changing”.

It seems to me that this whale realized her need for help.  She realized she needed to be rescued, to be saved from a slow and certain death.   She not only allowed the help by not fighting it, but she also received the help and then did her best to show her thanks to those who risked their lives to save hers.

Did you know that a Rescuer has also been sent you and I?  A Holy God sent His son, Jesus, to jump into the proverbial waters of mankind.  A dangerous place since mankind would ultimately deal Him a death blow.  Jesus taught for three years giving His Good News to a world bound up by sin and cares that He was the answer to all of life’s problems and that eternal life was (and still is) available only because of the shedding of His blood on the cross at Calvary.  He made the ultimate sacrifice – His life for ours.  Because of God’s plan, Jesus rose, after only three days, from the grave and He continues to offer eternal life and rescue to those who will ask for it, allow it, and then receive it by faith in Him who did the dying and the rising.   Have you dared recognize your need of rescue?  Have you received rescue from the ravages of sin which leaves us all in the position of a slow and certain death?  Jesus is willing to rescue you.  Just ask Him.  He is able and willing to cut you loose from sin’s death penalty.  Receive His forgiveness and show your thankfulness by moving in close to His side and learning from His words in the Bible.  It will be a life changing choice for which you will be eternally thankful.

I just love walking outdoors - day or night. I identify most with the creative side of God and am energized by His artistry all around this world. He amazes me every time I turn around! Yeah, God and thank you, Jesus.
Previous Dealing with Needs: Stepping Out in Faith
Next Mercy Is Jesus