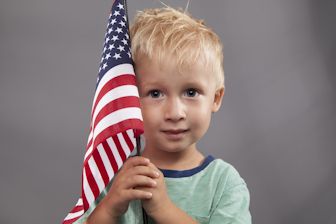 At a time when the United States military men and women are not being treated justly by the government, here are two heart-warming stories that show how private citizens have done something to honor them and give them the recognition they deserve.

A neighborhood in Suisun City, California, near San Francisco, decided to give a surprise to Master Sergeant Jack Bernardo. This Marine Corps veteran, who spent 21 years in the service, that included seeing combat in Iraq, had purchased a home recently to have a place to live upon his retirement. The house was in very poor condition and the yard was an embarrassment to the local neighbors. Sergeant Bernardo had planned to fix it up upon his return to the States, but he didn’t have to.

A close friend and group of people raised 20,000 dollars and put in hours of donated labor to completely renovate the house and landscape the yard. They did this upgrade, valued at 70,000 dollars, all in just ten days! Upon his return he was welcomed and taken to his home to which he had planned on putting in much time and money to renovate. Instead, “he was speechless when he found the home that was extremely run down had been completely remodeled.”

Now, from the ground of Suisun City to 40,000 feet in the air, on a flight from Detroit to Los Angeles, is another story revolving around a soldier and a celebrity. Amy Adams, who has been featured in Disney musicals as well as the movie, “American Hustle,” noticed a soldier in uniform sitting in the coach area of the aircraft. After speaking to the flight attendant the actress traded her first-class seat with his. It became obvious to everyone on the plane that Amy was showing her appreciation to an American serviceman by giving up her seat. The flight attendant said that that was the first time she had seen a celebrity do a humble act of that nature.

If you are active military, reserve, national guard, or a veteran, we at The Bottom Line want you to know that you are deeply respected and appreciated for your service in defending our country and helping other people around the world also experience freedom. May God bless you and your families. Thank you for what you do, and we salute you!

John Livingston Clark is 67 years of age and lives in central Washington State. He has written two published books, and two published poems. His initial book is called, " God's Healing Hope: Breaking the Strongholds of Wrong Thinking." His second book, released in December of 2016, is a motivational book written to seniors titled, " Seniors: Are You Retiring or Recharging?" Both books are available on amazon. You can also view his writings on www.faithwriters.com. John is available to speak on a variety of topics. Visit me at jclarkministries.com
Previous Google: Entertainment
Next Fairy Tale