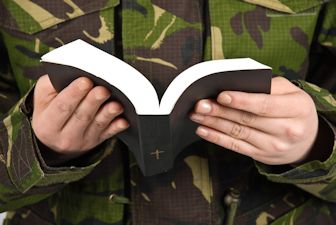 In World War II on November 13, 1944, a soldier by the name of Doc Long was part of France’s 2nd Armored Division. In the midst of a battle he was hit by ammunition from a German bazooka. After falling to the ground another shell hit so close to him that he was lifted off the ground and moved about a foot. His right arm was paralyzed but he was still alive. He believed that a Bible saved his life.

Eighty-nine year old veteran Long was given a pocket Bible by an aunt when he joined the army at age 19. His aunt told him, “I want you to read it daily and carry it with you wherever you go in the pocket over your heart.” On the day of that battle that’s exactly where he had it. After being discharged from the hospital he looked at the Bible still in the pocket of his uniform. It had been pierced by a piece of bazooka shrapnel and had stopped it from entering his chest. God intervened in this serviceman’s life during World War II. He is still at work in the military today.

As part of Operation Iraqi Freedom the First Battalion, Fifth Marine Regiment crossed into Iraq on March 20, 2003. Navy chaplain Carey Cash, great grand-nephew of Johnny Cash, was the leader and spiritual mentor of the regiment. It would be engaged in a very pivotal battle in the collapse of Baghdad and the capture of Saddam Hussein. His unit lost the first man in the U.S. invasion, but many lives would be spared through supernatural intervention.

Chaplain Cash had been spiritually preparing his men for 40 days prior to the invasion, camped in the Kuwaiti Desert. He started a 12-week Bible study, talked to his men about following Christ, and held counseling sessions. Before the invasion 60 marines gave their hearts to Jesus Christ and were baptized. All together 250 men made professions of faith before and during the battle, or after coming back home.

As it turned out there wasn’t much of a battle, at least for the marines. The battle was all God’s and he sent his angels to protect them. Crossing into Iraq they encountered an unpredicted line of tanks, but with no explanation they didn’t fire, and 3,000 enemy soldiers surrendered. While storming the Presidential Palace they faced an ambush of 1,000 troops and 1,500 rocket-propelled grenades. The grenades came at them but then curved around them or were batted down as if “some unseen hand” was at work. Another grenade went off inside a Humvee but exploded out instead of in, and not a single soldier was killed.

Carey Cash says, “I remember countless letters I had received from churches saying we are praying specifically when you cross that border that God would restrain and confuse the enemy. The fact that those guns never fired and 3,000 soldiers surrendered en masse tells me God answered the prayer of the people back in the U.S.”

God answers prayers for the military men and women, and He intervened to fight their battles. If God did what He did for the military in Operation Iraqi Freedom and for Doc Long in World War II, he most certainly can fight whatever physical, emotional, or spiritual battle you might be going through.

John Livingston Clark is 67 years of age and lives in central Washington State. He has written two published books, and two published poems. His initial book is called, " God's Healing Hope: Breaking the Strongholds of Wrong Thinking." His second book, released in December of 2016, is a motivational book written to seniors titled, " Seniors: Are You Retiring or Recharging?" Both books are available on amazon. You can also view his writings on www.faithwriters.com. John is available to speak on a variety of topics. Visit me at jclarkministries.com
Previous Knocking on Heaven’s Door For An Answer
Next Teens & Chat Rooms