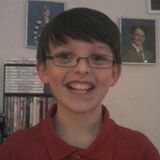 Young Colin is about to turn 11-years-old on March 9th.  To celebrate, Colin’s mom asked him if he would like a birthday party.  Colin declined the offer, stating that he had no friends to come to a party.  This is because Colin has trouble relating to other children due to a condition similar to Asperger disorder that impairs his social skills.  This bothered Colin’s mom, so she made a Facebook page seeking birthday wishes and positive encouragement for her son.  Since posting her plea, Colin has been receiving around 10,000 birthday wishes by mail each day, and has received over two million likes on Facebook.

Today, on Good Morning America, Colin was given the birthday party of his life.  This elaborate party took place in Time Square and included a performance by the Rutgers University Marching Band.  He also received birthday wishes from his many admirers and a T-shirt stating, “I went viral on my birthday.”  To top it all off, Colin and his family received an all expense paid trip to Disney World.  Happy Birthday Colin!

Joel M. Bauer is a 45-year-old U.S. Army Veteran from Dunn, NC, which is just outside of Raleigh. After being honorably discharged from the U.S. Army, he attended school at Taylor University, a Christian liberal arts school, in Fort Wayne, IN, where he received his BS in social work and psychology. He has worked in such places as a homeless shelter, a community based treatment center for severe mental illnesses, a school for troubled students, and other social service agencies. His current endeavor is to build The Bottom Line website into a site that inspires both Christians and non-Christians alike, and brings glory to God.
Previous Noah Versus Noah
Next “Son of God” Movie Review