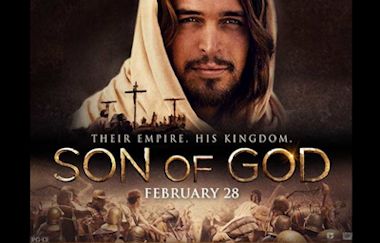 This movie brought the days of Jesus alive on the big screen.  It definitely is a different experience from watching the miniseries “The Bible” on television. Diego Morgado is the actor who played Jesus and Roma Downey is His mother, Mary.  All the actors are the same as “The Bible” miniseries because it is the same movie starting at Jesus’ birth; but seeing it on the big screen gives the feeling that you are amidst the days with the people of His time.  I loved the make- up and clothing, it made the people look authentic. The setting was the desert, the sand and stone terrain, made it look so life-like. It is very inspirational to see how Jesus transformed the lives of the humble and powerful conveying His message of comfort and hope. The miracles that they fit in this movie were very believable, as if He was really Jesus. The acting was magnificent and believable. They couldn’t have picked a better actor for the portrayal of Jesus. The compassion and love in this actor’s eyes was remarkable.

The apostle John narrates the beginning and the ending of the movie.  It depicts the Book of John from the Holy Bible from John 1:1—“In the beginning…The Word became flesh”.  The movie follows the events from Jesus’ birth to when Jesus ascends into heaven to be with His Father God, just as the Bible says.  It does not end there, you will be pleasantly surprised with John’s continued narration.

The movie did not show the beginning where Jesus met Satan in the wilderness.  I took a little tidbit from the “Denison Forum on Truth and Culture” newsletter that I would like to share with you on this scene that was deleted from this movie:

Roma Downey produced “Son of God” with her husband Mark Burnett, and played Mary in the movie.  She explains their decision when the devil appeared in the miniseries, “The Bible.”  Some thought the actor playing his role looked like President Obama.  The media reaction was global. She says that after that episode aired, “when I was sure everyone would be talking about Jesus, they were talking about Satan instead.”  She also went on to say how Satan was probably happy about having attention and how the attention was taken away from Jesus. So they did not want to give him any more publicity any longer and decided to delete that part. That was too bad because that is such an important part of Jesus’ life.

It makes me want to go to my Bible and read Matthew, Chapter 4 where Jesus met Satan; then read the Book of John again to fill in the missing pieces.  It would be a 20 hour movie if they included every miracle done by Jesus. I believed the actor as if he was really Jesus the duration of the movie.  I loved it and it is a definite 5 stars for me.  I hope you get to experience it on the big screen.

I have always enjoyed writing little things, poems, devotionals, little short stories and bible studies. I love God and want to glorify His name and I love praising Him. I live in upstate New York with my Chihuahua-Snowball. My children are grown and left me with an empty nest. I have lots of time on my hands and love to fill it with God's Word.
Previous Birthday Boy Goes Viral
Next Living in the Light