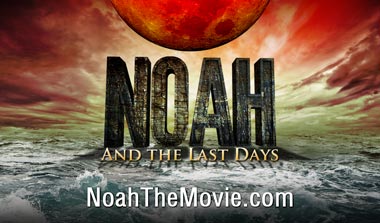 There is a lot of hype going on about the upcoming March 28th, 2014 release of the movie Noah.  However, Paramount Pictures has already released a disclaimer letting people know that there are parts of the movie that may not be true.  They did also suggest that they tried to incorporate the biblical truths of the story into the movie.

Living Waters Publications is also releasing a Noah movie called, “Noah and the Last Days”.  This 30 minute movie promises to give a true account of the story of Noah and to give a stern warning to those who don’t take its message seriously.  It will do this by showing the unfolding of 10 biblical prophecies linked to the story of Noah.

Noah and the Last Days is set to release on YouTube and DVD on, you guessed it, March 28th, 2014.  However you can purchase a pre-release download on the Answers in Genesis Website for $19.99 which includes some other goodies as well.

Joel M. Bauer is a 45-year-old U.S. Army Veteran from Dunn, NC, which is just outside of Raleigh. After being honorably discharged from the U.S. Army, he attended school at Taylor University, a Christian liberal arts school, in Fort Wayne, IN, where he received his BS in social work and psychology. He has worked in such places as a homeless shelter, a community based treatment center for severe mental illnesses, a school for troubled students, and other social service agencies. His current endeavor is to build The Bottom Line website into a site that inspires both Christians and non-Christians alike, and brings glory to God.
Previous You Otter Know Better
Next Birthday Boy Goes Viral