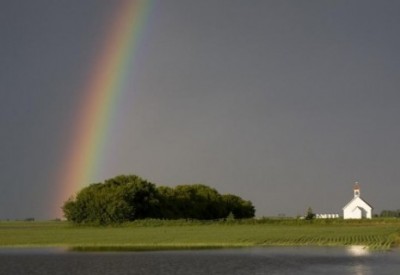 The love of Christ ultimately wins over cheap imitations.

Shocked, I read the comments on social media. A 19 year-old girl whom I’d known through youth group had posted an image of a cross and a quote which affirmed, gently and simply, her support for traditional marriage. Like sharks circling prey, several of her “friends” who disagreed had attacked, diving in and tearing at her with ugly remarks.

This girl has been through a lot, growing up in a fatherless home, losing her mother to terminal illness the year before, and getting pregnant in high school. Her “tolerant” acquaintances with their rainbow-shaded photos used her status as an unwed mother to launch their vitriol, essentially accusing her of being a whore and a hypocrite, ridiculing her statement of belief in God’s design for marriage by attacking her personally.

As crushed as I was to see this young girl endure such abuse, I was surprised and delighted to read her responses. One by one, she replied to each of her attackers humbly and kindly, not returning the ugliness but instead acknowledging that she herself was a sinner, had messed up, but sought God’s grace and wanted it for others.

“Conduct yourselves in a manner worthy of the gospel of Christ, so that whether I come and see you or remain absent, I will hear of you that you are standing firm in one spirit, with one mind striving together for the faith of the gospel; in no way alarmed by your opponents– which is a sign of destruction for them, but of salvation for you, and that too, from God. For to you it has been granted for Christ’s sake, not only to believe in Him, but also to suffer for His sake” (Philippians 1:27-29)

Suffering for the sake of Christ has been granted His followers! The Greek word used here means “bestowed as a favor.” It certainly might not feel that way when we are persecuted, but scripture states that it is a privilege that comes along with believing in Him.

Guess what happened next?

This same teenager messaged me and said that the one guy, who was an atheist, apologized for what he had written. He then went on to say that he had a lot of respect for Christians who were kind in the face of nastiness. When she told me, I was pierced through the heart with conviction that a spiritual transaction had taken place already in this young man’s heart through the sacrifice of her soft answer in the face of wrath.

Through her boldness and humility, this teen revealed before a wide audience of her peers that what was in her heart was a marked contrast to the true nature of her accusers. And that is true love – the uncommon, overcoming love of God – which ultimately wins.

Have you asked God for boldness in the face of persecution? Are you willing to suffer for His sake so that ultimately, His love can overcome?

Emily Tomko's radical encounter with the Lord while at a nightclub changed her life forever and inspired her first novel, College Bound: A Pursuit of Freedom. She is the author of seven books, including 31 Thoughts on Prophecy and Leaving the Shallows: igniting the faith that overcomes the world. Her tastes tend toward vintage and she's a Germanophile, having spent a year in Bremen and Nuremberg. Emily loves the scriptures and writes with fierce compassion and a deep desire to see people freed from the miry clay of this world and walking in the truth.
Previous “Fundamental Change”: The Shredding of the Constitution
Next The Christian Faith Of The Oak Ridge Boys