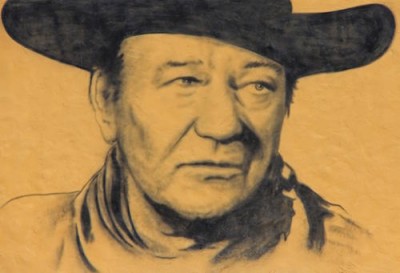 Of High Value–Not Everything is For Sale

She was just a little girl maybe seven or eight years old. She had gone on an adventure with her Poppy to visit the local gun store. In that small country town, most times it was the only adventure around.

She walked in and everyone could see that she saw it.

There, hanging on the wall was a life-size rug with a picture of John Wayne. Her eyes lit up and so did the owner of the store’s face. In his amazement, he stood there watching her. It was so hard to believe in this day and age that a little girl still even had heroes … much less John Wayne.

She wanted it so badly. Her heart was set and her Poppy did what only a Poppy would do–anything to make a little girl smile. Poppy’s solution, “Just name your price.” The shop owner shook his head and simply said, “Sorry, it isn’t for sale.”

Heartbroken, the little girl lowered her head. He looked at her sympathetically and then he told her, “I will not sell it to you, but I will give it to you. When I sell this place, it is yours.”

In the years that passed, several came in and made offers to buy it. It was even once stolen right off the wall. It was returned after the sheriff explained again that rug already had an owner.

Well, days turned to years, and health began to fail. Decisions were made that officially began the end of an era in that little town. Blow’s Gun Shop would be sold. The store, the business, the contents, everything was to be included in the sale except one item–the rug on the wall.

It was not for sale.

Papers were signed and the day came for the shop to change hands. All the details were complete and seemingly final, but the man still had one thing left to do.

Just a few days before Thanksgiving you could see him walking up the driveway. His gait a little slower, but his mission was as evident as the smile on his face. He knew the little girl would be coming for the holidays and he had one last thing to do.

His task? To deliver a promise. He pulled the rug out from under his arm and said,

“This, belongs to Lindsey.”

This year I am thankful for heroes, ones who keep promises made to little girls. I am thankful that she still believes that a man is as good as his word because that is the world that she knows.

That sweet gun shop owner is a living example that no matter the price, some things are just not for sale.

What an incredible gift that man gave my daughter that day … oh, and he gave her the rug too. 😉

What do you value above all else? How can you express someone else’s value to them today?

Previous Treasure In Your Heart, Like Mary
Next A New Season of Leadership