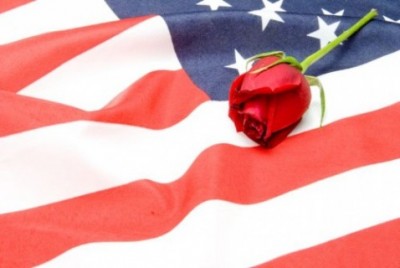 A deceased veteran of the Vietnam War returned to American soil on May 12, 2015. Master Sergeant James Holt was a Green Beret stationed at Long Vei, which was overrun by the North Vietnamese Army in 1968. He was reportedly trapped in a medical bunker and shot to death. His body was never found until December of 2014 when new DNA techniques identified his bones. After 47 years his widow, two sisters, and other family members were at Ronald Reagan Washington National Airport as the casket with his remains was brought off the aircraft.

To the pleasant surprise of the family, it turned out to be a much greater homecoming than anyone could have imagined. The week of May 10th was National Police Week. Dozens of law enforcement officers had just flown to Washington D.C. for an annual dinner event. Some of them learned of the arrival of the remains of a deceased Vietnam veteran. They formed an impromptu gathering beside the family members and saluted the fallen soldier.

National Police Week is set aside to remember law enforcement officers who have died in the line of duty. While military personnel have died defending our freedom, police officers have given their lives for defending our peace and safety. Since 1791 more than 20,000 cops in America have been killed! According to the F.B.I., 51  of those murders were in 2014. Romans 13:1-4 says, “There is no authority except from God, and those which exist are established by God…a minister of God for good.”  In light of recent events and the dishonor shown to police officers, they need our encouragement and support more than ever.

As the hearts of the family of Sergeant Holt were warmed, let us all bring some inspiration to veterans and police officers, who together, are protecting us at home and abroad. Next time you and I come into contact with one of these people we might consider warming their hearts by going up to them, shaking their hand, and expressing our thanks for what they do. There is a small percentage of people who are treating our veterans poorly and showing disrespect to our police officers. What can you and I do, individually, and corporately as a nation, to speak more loudly than the vocal minority?

John Livingston Clark is 67 years of age and lives in central Washington State. He has written two published books, and two published poems. His initial book is called, " God's Healing Hope: Breaking the Strongholds of Wrong Thinking." His second book, released in December of 2016, is a motivational book written to seniors titled, " Seniors: Are You Retiring or Recharging?" Both books are available on amazon. You can also view his writings on www.faithwriters.com. John is available to speak on a variety of topics. Visit me at jclarkministries.com
Previous If You Won’t Obey Good Authority, You’ll Have to Submit to Bad
Next Adopting God’s Idea of Love