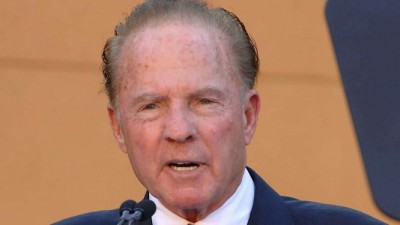 Two great men of God passed away within ten days of each other: Frank Gifford and Danny Lotz. They are now together in the presence of God, and each is a shining example of a life well lived with purpose and meaning.

“He died in complete peace.” Those were the words of Kathie Lee Gifford in reference to the passing of her husband, Frank. He played professional football and later went on to become an announcer. He passed away recently from natural causes at the age of 84. More important than sports is how he lived his life off the field. The secular world will remember him for his successful career on the gridiron and sportscasting. His wife remembers him for his religious faith and gratitude.

Kathie Lee had this to say when he left his earthly life on August 9, 2015: “He passed away instantly that morning…having his coffee, watching TV, getting ready to go, ready for church…He knew every sin he’d ever committed was forgiven…He had the hope that he would be with the Lord and that someday we would be with him as well…” His wife publicly talked about how Jesus Christ had completely transformed his entire life.

Frank Gifford had what many people are looking for today-forgiveness of sins and a hope after this life is over. He is an example of living a life with not only hope and peace, but with gratitude and contentment, not determined by wealth or position in life.

Danny Lotz is the husband of Anne Graham Lotz, and son-in-law of evangelist Billy Graham. He was found unresponsive in the couple’s swimming pool, and died on August 19th. He did not dwell on his accomplishments. Rather, he summed up his life by quoting Acts 20:24. “I consider my life worth nothing to me; my only aim is to finish the race and complete the task the Lord Jesus has given me-the task of testifying to the good news of God’s grace.”

His wife, Anne, said, “He moved to our Father’s house…and received the accolades of the Savior, Lord, and King who presented him with the crown of righteousness…” John 14:2 says, “In my Father’s house are many dwelling places…” for those who call upon Jesus, the Son of God in human flesh, for their eternal salvation.

How are you living your life? Are you basing it on what you have accomplished and how successful you can become, or on a solid foundation of spiritual truth? You also, can have what Frank Gifford and Danny Lotz possessed, forgiveness of sins and the hope of eternal life. Jesus Christ died and rose again for you, my friend. If you accept that by faith through grace, as a free gift apart from anything you can do, you also can have a place prepared for you in heaven. How about making that decision today?

"He died in complete peace." a career in football and sportscasting a sure foundation of spiritual truth Acts 20:24 Danny Lotz forgiveness of sins hope of eternal life John 14:2 Kathie Lee Gifford living life with meaning and purpose son-in-law of Billy Graham the passing of Frank Gifford 2015-08-31
John Clark

Tags "He died in complete peace." a career in football and sportscasting a sure foundation of spiritual truth Acts 20:24 Danny Lotz forgiveness of sins hope of eternal life John 14:2 Kathie Lee Gifford living life with meaning and purpose son-in-law of Billy Graham the passing of Frank Gifford

John Livingston Clark is 67 years of age and lives in central Washington State. He has written two published books, and two published poems. His initial book is called, " God's Healing Hope: Breaking the Strongholds of Wrong Thinking." His second book, released in December of 2016, is a motivational book written to seniors titled, " Seniors: Are You Retiring or Recharging?" Both books are available on amazon. You can also view his writings on www.faithwriters.com. John is available to speak on a variety of topics. Visit me at jclarkministries.com
Previous Mind Games: “Abstain from every form of evil”
Next The Apex of Narcissism: Selfie Addiction Turned Deadly