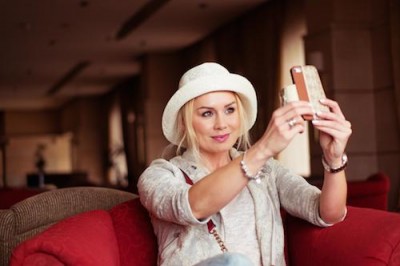 One hundred injured, 10 killed while taking selfies and that is just this year in Russia alone, who knows how many more have been hurt or killed around the world.

Taking selfies is using a phone to take a picture of one’s self, and people are becoming addicted to looking at themselves, sometimes to the point of death. They will stand on ledges, or in front of trains, hang themselves out of windows all to get that “awesome selfie” they then post on social media sites.

In Greek mythology there is a character  named Narcissus (from which we get the words narcissism/narcissist) who, being an attractive man, looked at his reflection and fell in love with himself so much so that he fell into the pool of water he was gazing at himself in and drowned.

God commanded us in Exodus 20:3-6 “You shall have no other gods before me. You shall not make for yourself a carved image, or any likeness of anything that is in heaven above, or that is in the earth beneath, or that is in the water under the earth. You shall not bow down to them or serve them, for I the Lord your God am a jealous God,visiting the iniquity of the fathers on the children to the third and the fourth generation of those who hate me, but showing steadfast love to thousands of those who love me and keep my commandments.”

These commandments are there to warn us away from following the example of Satan, who was an angel who became so prideful he tried to usurp God and take over. This selfie addiction that technology has helped to create is satanic in nature, it has people becoming so self absorbed they are literally risking their health and lives to get a picture of themselves. Like Narcissus they are killing themselves in the act of self love.

God has warned us, idolaters will not inherit the Kingdom of Heaven and the this new selfie addiction is idolatry of the worst kind, it is self glorification to the point of self-destruction.

So who are the people who get addicted to selfies? It would seem to be those who are heavy users of social media and feel a burning need to post their lives for all to see. How can you tell if you’re addicted to taking selfies or to social media in general? Can you go a full two days without taking a picture of yourself or checking status updates? If not, then it is safe to assume that there is some addiction present.

How does one break free of addiction? I know a man who was, for decades, addicted to heroin. He tried everything he could to break the addiction, but it just got stronger and stronger until one night in desperation he took a gun and put it in his mouth thinking death was his only escape. As he squeezed the trigger he heard a voice tell him to turn on the radio. He tried to ignore that voice, but it repeated itself twice, “Turn on the radio.”

Well, he put the gun down and turned on the radio. Immediately he heard a preacher tell him that Jesus Christ can save everyone from their demons if they just have faith and repent of their sins.

This junkie I know got on his knees and begged Jesus to save him from the addiction that had gripped him for nearly 30 years. He spent more than an hour listing all of his sins, from the drug abuse, to the crazy sex and violence he filled his life with, to stealing from family and friends, everything–he repented of it all.
When he was finished, he felt the Holy Spirit enter him and in an instant he was cured of his addiction. From that very hour he has never once craved drugs. After almost 30 years of the addiction he struggled to break, he was cleansed of it in an instant.

Prayer to Jesus Christ works, if fixes the broken spirit and brings hope to those without any. Faith in Jesus Christ is a lifting hand to those who have hit rock bottom and is a guide to the lost.

What does all of this have to do with taking an excessive number pictures? It does not matter if the drug of choice is heroin or alcohol or social media, all addiction is about is making yourself feel good, feel important or even feel like a god. All addiction is about self worship which is idolatry. It is God–and God alone–who we must worship.

Are you struggling with an addiction? Have you asked Jesus for help? Who can you talk to for help and accountability?

Jonathan Kotyk is a student, self taught philosopher, recovering addict and born again Christian. He has spent time on both the far Left and Far Right side of the political spectrum and lives in Canada.
Previous The Heartwarming Lives of Two Great Men
Next A Chat With Kyle Petty: Victory Junction