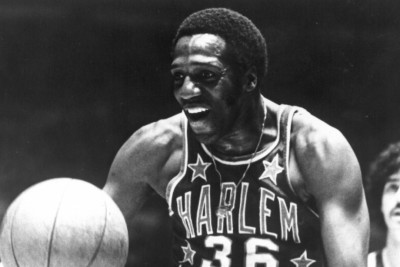 The Passing of the Globetrotters’ Meadowlark Lemon

He was called the “Clown Prince” of basketball. People of the older generation who went to see the Harlem Globetrotters play were constantly entertained by him. Meadowlark Lemon passed away on December 27, 2015. He was 83.

At 11 years old Meadow (his birth name) was inspired by a team from Harlem, and it became his dream to one day become one of them. He went to work on pursuing that dream by making a basketball hoop out of a coat hanger, a net from an onion skin, and using a can of condensed milk for a basketball.

Meadowlark joined the Globetrotters in 1954 and played in over 16,000 games in 100 countries over a span of 24 years. He thrilled audiences with his unusual and funny antics and incredible shots through the hoop. He was the one who would go into the audience with a bucket that everyone assumed contained water, but was only confetti. Along with the rest of the team, he made basketball a wholesome family entertainment venue for both young and old.

Meadowlark’s life did not stop when his time with the Globetrotters came to an end. In 1986, at the age of 53, he became an ordained minister. Then in 1994 he founded, along with his wife, Cynthia, an evangelical organization called Meadowlark Lemon Ministries. Included in the numerous arms of the ministry are Camp Meadowlark and the Meadowlark Lemon Harlem All Stars, all with the objective of sharing the love of God.

One of Lemon’s sayings was, “I want you to always remember that life’s most meaningless statistic is the half-time score.” Indeed, he practiced and lived by that. The second half of his life was just as strong as the first. He had a vision that refused to quit, and was truly a man who lived life intentionally, with purpose. For years to come people will be reaping the benefits of his life and ministry.

How is your life being lived? No matter your age can you say like Meadowlark that “it is always half-time?” There is always much more that you can do, new dreams, new ministries, more people to reach with the gospel of Jesus Christ. Do what you can do with what you have, where you are.

You may not be practicing shooting baskets with milk cans, onion skins, and coat hangers, but you can put into practice the command of Matthew 28:19-20. “Go into all the world and preach the gospel to every person…” I believe that not only does this verse refer to the geographical world but also whatever “world” you live in. For Meadowlark it was basketball. What are your abilities, talents, and spiritual gifts? Take them to where the people are, that they may see and hear the love, hope, and healing, found in Jesus Christ. The world could use a lot more Meadowlark Lemons.

John Livingston Clark is 67 years of age and lives in central Washington State. He has written two published books, and two published poems. His initial book is called, " God's Healing Hope: Breaking the Strongholds of Wrong Thinking." His second book, released in December of 2016, is a motivational book written to seniors titled, " Seniors: Are You Retiring or Recharging?" Both books are available on amazon. You can also view his writings on www.faithwriters.com. John is available to speak on a variety of topics. Visit me at jclarkministries.com
Previous The Immorality of Pacifism Part 2: Reply to Objections
Next Tip of the Iceberg: How Much Do We Really See?