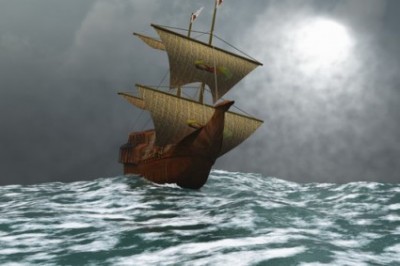 ” ‘Arise, go to Nineveh, that great city, and cry out against it; for their wickedness has come up before Me.’  But Jonah arose to flee to Tarshish from the presence of the LORD.” Jonah 1:2-3 (NKJV)

Jonah did do what the LORD commanded him to do–he arose.  But that is as far as his obedience to God went. Instead, he opted to flee His presence.  Surely, Jonah knew that the LORD our God is everywhere.  There is nowhere that we can go that He will not be there.

But Jonah, in his own wisdom, boarded a ship bound for Tarshish.  He paid for this trip, expecting to being delivered safely to his destination; away from the presence of the LORD.

While on the way to what Jonah thought would be his refuge, the LORD decided to give him an interesting experience. He whipped up a great storm on the sea, with mighty winds.  The seas were so rough because of this, that the ship was in danger of literally breaking apart.

The sailors on the ship were terrified.  They cried out to their gods, and they did what good sailors do; they threw everything with weight into the sea.  Jonah had gone below, into the belly of the ship, and was sleeping soundly.

“And they said to one another, ‘Come, let us cast lots, that we may know for whose cause this trouble has come upon us.’  So they cast lots, and the lot fell on Jonah.  Then they said to him, ‘Please tell us!  For whose cause is this trouble upon us?  What is your occupation?  And where do you come from?  What is your country?  And of what people are you?’  So he said to them, ‘I am a Hebrew; and I fear the LORD, the God of heaven, who made the sea and the dry land.’ ” Jonah 1:7-9

Jonah’s words brought new fear to the sailors.  They asked him why he had done this.  They asked him what they could do, to free themselves from the anger of his God.  Jonah told them to throw him into the sea, and it would become calm.  He admitted that this terrible tempest, which threatened their lives, was because of his disobedience to his God.

The men did not want to throw Jonah into the sea, so they tried to do everything they knew to do in such a storm, but this storm was obviously like no other they had ever seen.  It grew more terrible, causing them to cry out to the LORD to not allow them to perish, and to not charge them with innocent blood if they threw him into the sea.  Then they did so.  As soon as they did, the sea calmed.

Not only did the sea become calm, the men became believers in the God who Jonah feared.  They offered sacrifices to Him and made vows.  His power and might had been displayed in a way that they could not deny.

We all know the rest of this passage.  Jonah was swallowed by the great fish, and he remained in its belly for three days and three nights.  He prayed to the LORD. He prayed words of truth, confessing that he had tried to escape God, and had been cast out of His sight.  But he also humbled himself, and vowed to be true to Him once again.  He knew salvation was of the LORD.   Once this prayer was said, God spoke to the fish, and Jonah was vomited out onto dry land.

The LORD has always been Our Hope.  In Jonah’s case, He became his hope, and the hope of the sailors.  God not only delivered Jonah from his troubles, but He gained new souls as well. Disobedience often brings consequences, but our God is a forgiving God, once we have shown repentance and trust.  Jonah is an example to us today, and God has shown us that hope is never futile.  The tempest will be calmed when we trust in Our Hope.

Have you experienced a time when you showed disobedience to God, yet once you repented He delivered you from your tempest?  Please share with us at www.mystoryofgrace.com, that we may celebrate your victory with you!

anger of God arise Disobedience go to Nineveh God spoke to the fish His power Jonah feared the LORD Jonah's Tempest Our Hope sailors Salvation is of the LORD The Great Fish The LORD has always been Our Hope The Storm they made sacrifices wickedness www.mystoryofgrace.com 2015-05-02
Lili

Tags anger of God arise Disobedience go to Nineveh God spoke to the fish His power Jonah feared the LORD Jonah's Tempest Our Hope sailors Salvation is of the LORD The Great Fish The LORD has always been Our Hope The Storm they made sacrifices wickedness www.mystoryofgrace.com

Lili lives in central North Carolina. She writes devotionals and Christian articles and has been published in e-magazines, newsletters, and articles. She is a member of Faithwriters.com. She and her husband Chuck love to travel, and are animal lovers as well. They are active in their local church. Lili credits God for any inspiration that allows her to write. It's all about Him!
@@ohiolili
Previous Grabbing for the Brass Ring
Next Stop Hitting the Snooze Button on God