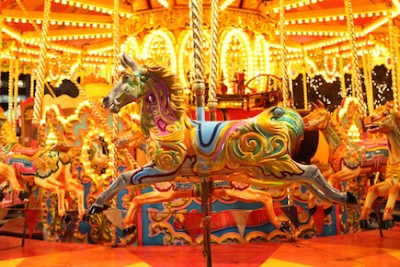 Grabbing for the Brass Ring

I woke up this morning convicted of a sin from the day before.  After getting right with God, I started thinking about why this particular sin has always been a problem for me.  It’s a personal struggle that I would love to banish from my life once and for all, but I’ve been unable to do so up to now.

Yesterday, my devotion had this passage.  Tread carefully, everyone.  It’s a tough one to read.

“We minimize the danger of what God calls dangerous, we question the need for the boundaries that God has set for us, and, in the face of our own sin, we argue that it’s not so bad after all.  Every day in some situation or relationship, we are tempted to think that we are smarter than God.”
(New Morning Mercies, Paul David Tripp).

Yeouch!  Right between the eyes!  It only hurts because it’s true.  At the moment of the sin, we forget who we are and Whose we are.  We come up with numerous reasons why whatever we’re doing is okay.  “It’s just this once,” “It’s not that big of a deal,” “It feels good,” “I deserve it,” or, “It’s not hurting anyone.”  Sound familiar?  Let’s dive deeper.

Take a good look at your life.  Home, work, school, relationships.  In each of these areas, God has laid out how to live.  In each of these areas God has blessed us.  So why is it we insist on overstepping the boundaries or thinking we deserve more than we have?  We lie, cheat, steal, become jealous, gossip, commit adultery, and so much more.  Before we sin, we make the decision, either consciously or subconsciously, that we don’t have quite enough, or that our ways are better than God’s ways.  In either case, we’re telling God that He doesn’t know what He’s doing so we’re going to go ahead and do our own thing.

Instead of being a good steward of what God has given us, we insist on asking for more or doing things we shouldn’t.  In this carousel called “life,” we reach for the brass ring glimmering in the distance.  The brass ring is whatever we’re setting our hearts on other than God.  You know what your brass ring is.  It’s that pet sin that you’ve struggled with for so many years.  It’s the drug or alcohol addiction.  It’s the gossiping that happens in the lunchroom at work.  It’s the sexual relationship that happens outside of marriage.  It’s the lying done to a spouse because you can’t control your spending.

But here’s the thing with those brass rings.  You can only carry so many before you aren’t able to hold onto your carousel horse.  Your life spirals out of control.  Eventually, you’re going to reach out for one of those rings and fall off the horse and get hurt, or hurt those around you.  God gave us the boundaries He did for a reason.  As much as I hate the quote, “God is not a cosmic killjoy,” it’s actually true.

God is not an evil dictator who only gives us boundaries in order to destroy all of our happiness.  It’s quite the opposite.  He came to give us abundant life. (John 10:10)  Abundant is defined as “existing or available in large quantities; plentiful.”  Some of my favorite synonyms are ample, profuse, lavish and abounding.  Those are some pretty fantastic words, if you ask me.  Nowhere does it say scarce, sparse or stingy.  If God were a tightwad, He wouldn’t have sacrificed Jesus to pay the price for our sins.

If you find yourself with an armful of rings, all is not lost!  You can get rid of those rings by confessing your sins to God.  In 1 John 1:9 it says that when we confess, God is faithful and just and will forgive us of our sins and cleanse us.  Acts 3:19-20 says to repent and turn to God so that you can be refreshed by the presence of the Lord.  And once we come to God with our sins, we are free to do what God has called us to do on this earth.  We are free from shame and no longer slaves to sin, but slaves to righteousness which leads to holiness which results in eternal life. (Romans 6:19-23)

What brass rings have you been carrying around lately that have been preventing you from being the person God created you to be?