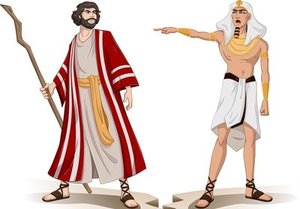 Our Hope: Let My People Go

‘Afterward Moses and Aaron went to Pharoah and said, “This is what the LORD, the God of Israel, says, ‘Let My people go, so that they may hold a festival to me in the desert.’ ”  Exodus 5: 1 (NIV)

Have you ever felt like you did not have a way of escape from a situation, a person, or even from your own thoughts? Of course you have.  We all have.  And it is a very real, and very uncomfortable, feeling.

I have known a few people who have been in prison.  And they all say that the worst thing about being there was that they could see outside at times, but could not go there.  Knowing that they were not able to leave the building, that the great doors could not be penetrated, gave them a sense of hopelessness.

Once, and only once, I went with someone who was picking up a relative from a maximum security prison.  This was in the 1970’s.  I had never been to any jail in my entire life.  But there I was, going through a security check, answering a lot of questions, and finally was escorted to the waiting area for departing prisoners.  I can still, after all these years, remember that horrible feeling when the main door slammed shut behind us, with a huge bang, and then I heard the sound of the bars inside the door sliding through, to give even more security.  I, along with the prisoners, was now locked inside, with no way out of my own accord.  I was terrified!

That is probably much like how the Israelites felt when they were in slavery in Egypt.  For 400 years they had been there, at the mercy of slave masters and Pharoah.  Their lives were of no consequence, their needs rarely met.  Their lives were hard, with long days full of difficult work.  And it kept getting more difficult, and they were filled with hopelessness.

The LORD sent Moses and his brother Aaron to Egypt, with the purpose of using them to free His people from slavery. Each time they met with Pharoah, the LORD told them just what was to be said, and what actions were to be taken.  And each time they challenged Pharoah to let God’s people go, he refused.  Scripture says that God hardened his heart.

But after a series of plagues, and finally the loss of the firstborn of Egypt, including Pharoah’s own son, he relented.  He allowed them to leave, to go with Moses and Aaron into the desert.  While he would eventually change his mind once again and pursue them, for the time being they were free men and women.  They had been delivered.

The LORD was their hope.  He banished their suffering, their hopelessness.  He delivers each of us in much the same way.  He tells the enemy to ‘Let My people go’, and the enemy must flee.   He is Our Hope, and His name is Jesus.

Lili lives in central North Carolina. She writes devotionals and Christian articles and has been published in e-magazines, newsletters, and articles. She is a member of Faithwriters.com. She and her husband Chuck love to travel, and are animal lovers as well. They are active in their local church, where she teaches the Senior Adult Sunday School class, and he serves as a deacon. Lili credits God for any inspiration that allows her to write. It's all about Him!
@@ohiolili
Previous You’re Not the Boss of Me! Are you?
Next Public Servants…Honor Your Oaths