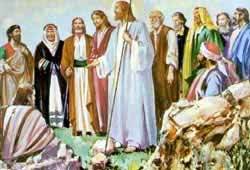 Our Hope: Prepared To Witness

“But you will receive power when the Holy Spirit has come upon you, and you will be My witnesses in Jerusalem and in all Judea and Samaria, and to the end of the earth.”  Acts 1:8 (ESV)

Jesus made this statement to His beloved disciples just before they watched Him ascend into the heavens, to go to His Father.  They had seen Him die, and they had seen Him alive afterwards.  Their minds must were full of all they had witnessed in the past few days and weeks, and now they were being told to expect something new, a visit from the Holy Spirit.

This was one of the may ways Jesus prepared the disciples to continue on without His physical presence.  Throughout His three year ministry, He often told them of His impending arrest and death, but they did not really believe it would actually happen.  What Jesus was doing was letting them know, gently, kindly, that the ministry would be in their hands once He was gone from them, and He expected them to be ready and able to carry on.  He did not want them helpless, with no foundation, with no resources to be able to assume the responsibility He expected them to accept.  He wanted them to be witnesses, and to share the gospel with power and strength.

Often, when Jesus was teaching others, He was also teaching the disciples.  He used the parables in such a way.  They learned about forgiveness and acceptance, and about foolishness, from the parable of the Prodigal Son.  They learned about handling money from the Parable of the Talents.  Jesus was always telling them things that He wanted them to remember, and eventually be able to use.  This was one of the great benefits of the fellowship they all enjoyed together.

Even during The Last Supper, Jesus took the time to teach.  When He broke the bread and poured the wine, He told them the bread was His flesh, and the wine was His blood.  He explained that His blood represented His covenant, poured out for the forgiveness of sin.  He also told them to eat and drink, for He would not drink of the wine again until they were with Him in His Father’s kingdom.  Jesus was teaching them who He was, what He was doing for them, and why He was doing it.  Of course they did not understand it all yet, but once He ascended to His Father, the pieces began fitting together, and they were able to be about the business of ministering through the gospel, just as Jesus had intended.

God has always equipped those He uses for His work.  He uses various ways to do it, one of them being by allowing us to go through trials that challenge our beliefs and our faith.  He refines us through this process, and we become more seasoned, mature Christians as a result.  Read about Moses, who had no real talents.  Yet God used Him.  Learn about Noah, who built the first boat, but knew nothing about constructing one.  Yet he did it, and quite successfully.  Think about young Mary, who He chose to be the mother of Jesus. She was a virgin, pure and devoted, yet she faced public disapproval and an unknown future to be available for the task ahead.  God provided every single thing she needed, including a devoted husband in Joseph.

Jesus is Our Hope.  And because He is, when He calls, He equips.  Once we accept our purpose and His plans, He will make sure that we are prepared for anything to come, and have the faith that we will have words to speak and actions to perform.  We may not know this until the moment comes, but if we are willing in spirit, we will be ready.  We need not fear speaking the gospel, presenting the salvation plan, going into dangerous neighborhoods, or going on a mission to a war-torn country.  When we are ministering in God’s will, we are the safest we will ever be in this life.

How can we make sure we are prepared?  First, we must be willing vessels.  When we are, we must also be in the Word of God often.  We will become closer to the Lord, and we will recognize when He speaks, and we will sense what He wants from us.  He will often put someone in our path who may teach us things of value to the kingdom.  He will prepare us and equip us, and we will bring Him honor and glory, as we share His Word with those who are lost and hurting.  Jesus prepares all His disciples to be His witnesses to the end of the earth.

When have you realized Jesus had prepared you for work on His behalf?  Please comment here or go to www.mystoryofgrace.com and share your experience with us!

"You will be My witnesses" Jesus is Our Hope Jesus prepared His disciples Jesus taught through parables Noah built the first boat Our Hope: Prepared To Witness Read the Word of God Share the gospel in power and strength The disciples saw Jesus ascend The Last Supper www.mystoryograce.com 2015-09-26
Lili

Tags "You will be My witnesses" Jesus is Our Hope Jesus prepared His disciples Jesus taught through parables Noah built the first boat Our Hope: Prepared To Witness Read the Word of God Share the gospel in power and strength The disciples saw Jesus ascend The Last Supper www.mystoryograce.com

Lili lives in central North Carolina. She writes devotionals and Christian articles and has been published in e-magazines, newsletters, and articles. She is a member of Faithwriters.com. She and her husband Chuck love to travel, and are animal lovers as well. They are active in their local church. Lili credits God for any inspiration that allows her to write. It's all about Him!
@@ohiolili
Previous FEAR:  False Evidence Appearing Real
Next Daniel’s Diet in Babylon