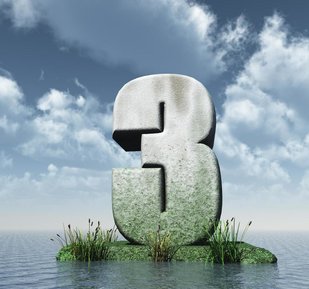 Our Hope: The Number Three

“Though one may be overpowered by another, two can withstand him.  And a threefold cord is not quickly broken.” Ecclesiastes 4:12 (NKJV)

God is a god of order, and of numbers.  This is a logical assumption, as most order follows a numerical path.  Over the years I have read various books and articles related to the use of numbers in the Bible, and mostly the information I find in different resources pretty much matches up.  Of course, it would, because after all, it is in ORDER!

I want to focus on the number three today.  Three is a very common number in the Bible, and is second only to the number seven in significance.  Seven is the number of completeness and perfection (in both the physical and spiritual sense).  It is referred to 735 times, 54 of which are in the Book of Revelation alone.  It is commonly considered to be “the foundation of God’s Word”.  And, the New Testament contains 27 books, which equals out to 3 x 3 x 3, or completeness to the third power.

But number three is a very well-known and powerful number in its own right.  It is used in the Bible 467 times.  It represents completeness as well.  It is first of the four spiritually perfect numbers, being three, seven, 10, and 12.  Biblestudy.org suggests that the three righteous “patriarchs” before the flood were Abel, Enoch, and Noah.  After the flood there were the righteous “fathers”, Abraham, Isaac, and Jacob.

Christians generally think of the number three as associated with Jesus Christ.  His ministry on earth lasted three years.  Three people witnessed His transfiguration on Mount Hermon, John, Peter, and James.  Jesus’ age at His death was 33. The cock crowed three times when Peter betrayed Jesus.  Jesus asked Peter, “Do you love Me?”, 3 times.  And most well-known of all, Jesus arose from death on the 3rd day after His crucifixion.

It is helpful to know about how numbers are used in the Bible.  No, such knowledge does not actually change anything in our lives.  And no, being saved is not part and parcel of the numerology system.  We are saved by Jesus’ grace, and grace alone.  There is no number that contributes to that action, only Jesus’ own intervention into our lives, and our response to Him.  But knowing about the power of numbers most assuredly reinforces the power and strength, the order and focus, of how our God works, how He thinks, and how He remains ever faithful to His people.

Jesus is Our Hope. Because He is, we can take all things by Him for granted, that what He says He will do, He will do.  We can believe in the third heaven.  We can trust that the three angels whose names have been revealed, Michael, Gabriel, and Lucifer (the fallen angel, now known as Satan), to be real beings.  And most of all, we are able to believe in the Trinity, in the Father, the Son, and the Holy Spirit.  This is eternity, and it comes through the saving grace that flows from Jesus to those who come to know and accept Him, both as their Savior, and as the Truth, the Way, and the Light.

God is depicted as a Being, a Deity, by these three things: “which is, and which was, and which is to come” (Revelation 1:4).  How fitting that we can be assured of His faithfulness, of Our Hope, simply by understanding the meaning behind a simple number, 3.

Do numbers give you a headache like they do me?  No matter!  Please do a bit of research, and learn about the importance of numerology in the Bible.  In these days, it is more important than ever, as we see events unfolding which have numerical significance.  If you need reference resources, please comment below and I will provide you with some reliable publications that you can obtain.  God bless!

3 is completeness 3 is well-known and powerful 7 is the foundation of God's Word biblical numerology He remains ever faithful to His people Jesus asked Peter "Do you love Me?" Jesus rose from death on the 3rd day John 11 Our Hope: The Number 3 patriarchs Abel Enoch Noah The book of revelation The Truth The Light and The Way threefold cord 2015-11-28
Lili

Tags 3 is completeness 3 is well-known and powerful 7 is the foundation of God's Word biblical numerology He remains ever faithful to His people Jesus asked Peter "Do you love Me?" Jesus rose from death on the 3rd day John 11 Our Hope: The Number 3 patriarchs Abel Enoch Noah The book of revelation The Truth The Light and The Way threefold cord

Lili lives in central North Carolina. She writes devotionals and Christian articles and has been published in e-magazines, newsletters, and articles. She is a member of Faithwriters.com. She and her husband Chuck love to travel, and are animal lovers as well. They are active in their local church. Lili credits God for any inspiration that allows her to write. It's all about Him!
@@ohiolili
Previous When Silence is Dangerous
Next The Lion and the Lamb