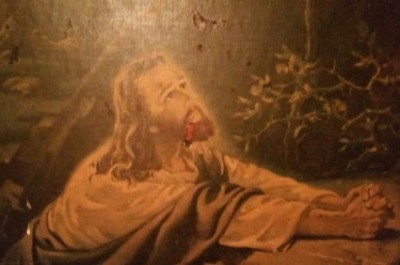 Our Hope: The Prayer In The Garden

“Then Jesus came with them to a place called Gethsemane, and said to the disciples, ‘Sit here while I go and pray over there.’  And He took with Him Peter and the two sons of Zebedee, and He began to be sorrowful and deeply distressed.  Then He said to them, ‘My soul is exceedingly sorrowful, even to death.  Stay here and watch with Me.’ ”   Matthew 26:36-38 (NKJV)

Jesus and His disciples had just experienced The Last Supper.  He laid out the events of the coming days, telling of His betrayal, and subsequent rising from the dead.  They ate together, and then they sang a hymn.  After that they went outside, to the Mount of Olives.

Jesus took His disciples and went to the Garden of Gethsemane to pray.  He knew He needed to be close to His Father.  He knew what He was facing.  Remember, Jesus was God, but He was also a man.  A man without sin, but a man just the same.  He felt pain and anguish, sorrow, distress.  He did not, however, feel pulled away from His mission.  He knew what it was, and why it was.  But just the same, He knew He needed His Father.

So He left Peter and the sons of Zebedee, James and John, to keep watch, so that He could pray without concerns of interruption.  As He prayed, He confessed to His Father that He wanted this “cup” to pass from Him.  But almost in the same breath, He spoke the words that it should not be as He willed, but as His Father willed.  Jesus said to His Father that His will was paramount, not His own.  He was in true agony, sorrowful and distressed. Yet He was the servant of His Father.

Jesus went to the disciples He had left on guard, and found them asleep.  The Messiah found His trusted friends were unable to remain awake while He prayed.  He reprimanded them, and went back to pray. He prayed in much the same way as before.  Then He went to His disciples, and again found them asleep.  Jesus went away again, praying as before, but this time He prayed so intensely, and with such passion, that blood dropped from His skin.  He was deeply distressed, yet our Lord had the resolve to finish what had been started, and would do the will of His Father.  When He was finished with His prayer, He returned to His disciples for the third time, and found them sleeping yet again.

“Are you still sleeping and resting?  Behold, the hour is at hand, and the Son of Man is being betrayed into the hands of sinners.  Rise, let us be going.  See, My betrayer is at hand.”  Matthew 26:45-46

Judas led soldiers to where Jesus was in the garden.  He was arrested, and taken to the high priest. Shortly afterwards, Peter betrayed Jesus three times, and then Peter himself heard the cock crow.  His sorrow was great when He realized that His Master had told the disciples truth at their supper.

The story continues, because Jesus is Our Hope.  What was foretold by the prophets was about to come true, which would bring salvation and eternal life to all of us who have chosen to follow Him. Hope is a Gift, and bears the name of Jesus the Christ.

Have you ever wished to be spared an undesirable situation, that would benefit someone else, yet cause you harm?  If so, please share with me how that affected your life.

(The picture used with this devotional is one from my girlhood home, passed down to me. It is old and worn, and damaged with time, but the face of Jesus in His agony is priceless forever. Credit is given to the painter, Warner Sallman, 1941, and the copyright in 1942 by Kriebel and Bates.)

Lili lives in central North Carolina. She writes devotionals and Christian articles and has been published in e-magazines, newsletters, and articles. She is a member of Faithwriters.com. She and her husband Chuck love to travel, and are animal lovers as well. They are active in their local church. Lili credits God for any inspiration that allows her to write. It's all about Him!
@@ohiolili
Previous The 7 Eyes of The Living Stone
Next You Never Know