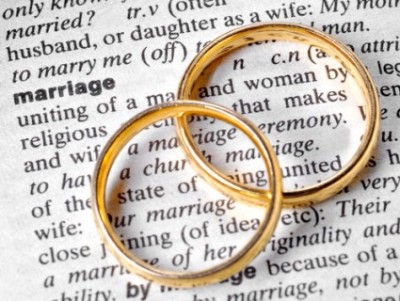 Our Hope: What Marriage Is

“But at the beginning of creation God ‘made them male and female.’  ‘For this reason a man will leave his father and mother and be united to his wife, and the two will become one flesh.’  So they are no longer two, but one.  Therefore what God has joined together, let man not separate.”  Mark 10:6-9 (NIV)

Today my family and friends witnessed one of my granddaughters’ marriage.  It was a lovely, but simple wedding, in our church and officiated by our pastor.  Her sisters were bridesmaids, and my husband was best man.  The reception following was also simple, but very nice.

While I was watching the ceremony, I began thinking about the high emotional state of the bride and groom.  And then I remembered my wedding.  My thoughts progressed on, past what men and women think of and about marriage, and I began to envision Jesus Himself watching the proceedings, and I wondered what He was thinking of this one.

Of course, we know what the Bible says.  We know the morality of it, the necessity of it, and the course of it.  But do we really understand the why of it?

God created man and woman for several reasons.  Primary, is that He wanted us.  He created man first, and He made him in His image.  Later, He created woman, to be what?  A helpmate to the man.  Being a helpmate brings an almost immediate relationship of trust and caring for one another.  That is also displayed throughout Scripture by the hierarchy of the family.  God first, man second, the woman, and the child.  That is not to say the man is more important than the women, or that the child has no importance at all.  It is only that God is a god of order.  There must be order to maintain consistency and strength.

The second reason was to procreate.  Yes, God decided He would use man and woman to populate the earth He had created.  This is the most orderly, astute pathway to accomplish this.  Marriage is established and children are born of it.  So, in essence, God wants man and women to be His companions, and He wants them to produce more like them to continue and grow the earth’s population.

This young couple standing before us today were not thinking about these things.  They were not considering God’s creation while they recited their vows.  But they were remembering that God had brought them together, that He had blessed them with their love, and that He would enrich their marriage, and their lives, because He would be at the center.  While they grow in their love and their relationship with one another, and with Him, they will be less likely to suffer terminal attacks aimed at their marriage.  They will be able to withstand anything that may come against them.

Jesus is Our Hope.  And because He is, He blesses marriages that are founded on God’s truths.  When marriage begins as a pure expression of love, it will become a wall of strength that cannot be knocked down, by man or by demon.  Jesus will guard it, preserve it, and sustain it.  The hope that is experienced in marriage will reflect His principles, and His grace will make its path straight.

“A wife of noble character who can find?  She is worth far more than rubies.  Her husband has full confidence in her and lacks nothing of value.  She brings him good, not harm, all the days of her life.”  Proverbs 31:10-12

Please go to www.mystoryofgrace.com, and share your story of what marriage has meant to you.

a pure expression of love consistency and strength God created man and woman God is a god of order God would be at the center of their marriage grannddaughter's wedding He blesses marriages founded on God's truths He would enrich their marriage helpmate His grace will make its path straight Our Hope: What Marriage Is populate the earch procreation terminal attacks they recited their vows 2015-07-11
Lili

Tags a pure expression of love consistency and strength God created man and woman God is a god of order God would be at the center of their marriage grannddaughter's wedding He blesses marriages founded on God's truths He would enrich their marriage helpmate His grace will make its path straight Our Hope: What Marriage Is populate the earch procreation terminal attacks they recited their vows

Lili lives in central North Carolina. She writes devotionals and Christian articles and has been published in e-magazines, newsletters, and articles. She is a member of Faithwriters.com. She and her husband Chuck love to travel, and are animal lovers as well. They are active in their local church. Lili credits God for any inspiration that allows her to write. It's all about Him!
@@ohiolili
Previous “Oh Be Careful Little Eyes What You See”
Next Everything But The Matches