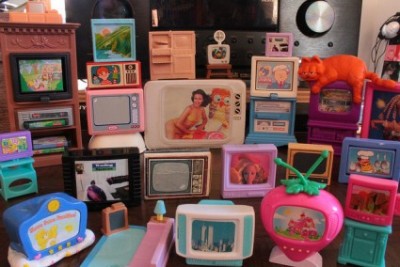 “Oh Be Careful Little Eyes What You See”

Yesterday, I talked about a personal experience in my life and how it led to a more reflective situation in our home. I talked about a particular TV series and how it “seduces” viewers with its beauty and grandeur. I discussed how viewers become immersed in the imagery and then allow its subplots of marital infidelity, premarital sex, homosexual relations, greed, and many other vices into their homes. As I said, for us, this has become an issue. We have taken a stand and really limit what is viewed in our home. (If you are interested in our personal journey, you can read about it HERE.) Today, I want to talk to you about your home. I want to encourage you to evaluate your own entertainment standards and consider raising them a might higher.

A new study in the Journal of Pediatrics says the “average eight-year-old child spends eight hours a day on media. A teen typically more than 11 hours of media a day.” If you consider that children and teens average eight hours of sleep a day, that leaves only five to eight hours of the day for transportation, schooling, grooming, eating and spending time with families. Like it or not, America’s children are being influenced more by external influences than from internal ones. This stat proves it. Children today are immersing themselves in media. They are learning life lessons and forming political opinions from it.

Think for a second about what your children are watching. Sitcoms? Don’t say, “Oh that’s just comedic relief from the pressures of the world.” Dig a little deeper. Investigate the sitcoms and look for elements that are contrary to your biblical worldview. Would you allow a thirty-something male into your house who’s only dating interest is sex with as many women as are willing? Would you allow some young adults to enter your space to make out and have sex on the couch? Probably not, but that’s what is going on in so many of the sitcoms. By watching these shows or allowing your family to watch them, you are welcoming these people into your life and are sending the message that their lifestyles and choices are okay with you.

If your kids are watching dramas, don’t say, “It’s just an interesting look at the way different groups–police officers, doctors, the upper class, etc.–live.” Scrutinize the drama again looking for elements that are contrary to your biblical worldview. I think you will find that many of the mainstream shows’ entire plots revolve around violence and sex. Is this what you want your children to see? Do you want them to believe the stereotypical body images, the casual portrayal of sex in all dating situations, the violence that occurs on television every three minutes (Journal of Pediatrics) is reality and is acceptable?

Don’t give in just because everyone else is! Look to the Bible as your basis and remember your own upbringing. I remember the song “Oh Be Careful Little Eyes What You See” and I believe it’s even more relevant today than it was when I sang it in my youth. I believe what Paul said in 1 Corinthians 15:33.

If we allow our families to watch evil entertainment, we will see evil. Our children will imitate the behaviors they see and our good morals will be corrupted. Like David in Psalm 101:3, we have to take a stand. As he said:

“I will set no wicked thing before mine eyes.”

This has become our family’s commitment, and I truly pray it will become yours.

What behaviors have you allowed in your home through the guise of comedy or drama? What steps will you take to stop them from re-entering your space?

Heidi Lynn has a passion for women's ministry and can be found writing at Chronicles of a New Creation. Heidi believes that as Christian women, we were created to serve our families, our churches, and our communities. With this calling in mind, she writes and speaks about organization in homes, families, and spiritual lives.
Previous Fornication: It’s Still Adultery
Next Our Hope: What Marriage Is