Breaking News
Home / Poetry / Jonah – The Fishiest Prophet of All 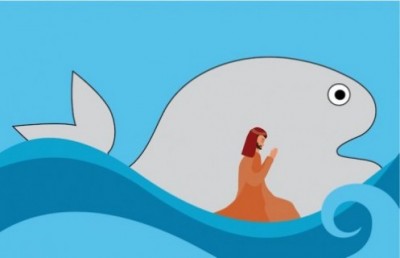 Jonah – The Fishiest Prophet of All

The word of the Lord came to Jonah, and said, “to Nineveh you must go”,
Jonah tried to sneak away, not even bothering to tell God, “No!”

He climbed into a boat in Joppa, and tried to flee to Tarshish,
Little did he know that God was about to make him famous with a fish.

As the ship sailed to Joppa, the Lord caused a tempest to arise,
To the crew onboard this was an unwelcome surprise.

The men on the ship found Jonah asleep,
They cast lots to decide who would be thrown into the deep.

The lots landed on Jonah, who declared he was running from the Lord,
The men wasted no time and threw the sinful prophet overboard.

God prepared a great fish, and some may even say it was a whale,
It gobbled up Jonah; Oh how that must have made him smell.

Out of the belly of hell did he cry for three days and nights,
Part of the journey was over, and the fish opened its pearly whites.

To the great fish the Lord did speak,
Jonah was vomited out. Oh, how he had to reek.

For a second time, the Lord declared, “to Nineveh you must go”,
Our friend wasn’t happy, but decided to get on with the show.

Our friend gathered himself and went to the great city,
He preached, but without heart, showing the people no pity.

For the people of Nineveh couldn’t tell their left hand from their right,
However to Jesus, they were beautiful in His sight.

The Ninevites faithfully and sincerely repented of their past,
They even sat in ashes and declared a fast.

The Lord showed perfect mercy and gave them a new start,
But Jonah was angry and held contempt in his heart.

Jonah sat outside the city, hoping it would be destroyed,
This was when another plan of God was deployed.

Out of the ground came a beautiful gourd,
This was the handy work of our Lord.

Next, the Lord prepared a worm and the entire gourd did it eat,
When the sun arose, on the head of Jonah did it beat.

Jonah fainted, and then you won’t believe what he said,
He declared to the Lord that he wished he was dead.

The Lord asked him how he could pity the gourd he did not grow,
For it was the work of God that Nineveh He did sow.

Once again, He was asked how he could want the people to perish,
For the Ninevites became God’s children who He would cherish.

In all this there is a lesson to be learned,
Our glorious Savior loves a heart that has turned.

So next time you see a fish or a whale in the blue,
Remember our Savior who hung on the cross for you.

Who are some people that you can share God’s mercy with?

Joel M. Bauer is a 45-year-old U.S. Army Veteran from Dunn, NC, which is just outside of Raleigh. After being honorably discharged from the U.S. Army, he attended school at Taylor University, a Christian liberal arts school, in Fort Wayne, IN, where he received his BS in social work and psychology. He has worked in such places as a homeless shelter, a community based treatment center for severe mental illnesses, a school for troubled students, and other social service agencies. His current endeavor is to build The Bottom Line website into a site that inspires both Christians and non-Christians alike, and brings glory to God.
Previous Embracing the Comfort of the Rod and Staff
Next Finding A Place At The Table