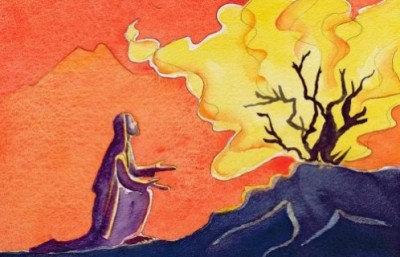 Moses – From Prince to Prophet

To Amram and Jochebed there was born a godly child,
A prophet, a son, and upon him God certainly smiled.

Moses was his name and he would become the most humble man,
For God instilled this in him as part of His perfect plan.

One day Pharaoh became angry and demanded the Hebrew sons be thrown into the river,
But wait, our Lord would use this as part of His plan to deliver.

Jochebed could only hide her precious child for awhile,
She placed him in a basket and sent him down the Nile.

Pharaoh’s daughter found the babe at the river bank,
When baby Moses wept, her heart sank.

She called upon her maid to help, and they raised Moses without shame,
A judge and a prince of Egypt our young friend became.

Moses spied an Egyptian hurting one of his Hebrew brothers,
He killed the offender, and hid his body in the sand from the others.

To the land of Midian did our fearful prince flee,
There he married Zipporah when she filled his heart with glee.

One day to Mount Horeb he took his father-in-law Jethro’s flock,
What he saw next would give him a shock.

Out of a burning bush did the angel of the Lord appear,
God made His instructions to Moses very clear.

He was to go back to Egypt and free the children of God,
To Moses a sign was given, when a living serpent became of his rod.

Moses was reunited with his brother Aaron who would help be his voice,
You see, Moses couldn’t speak well and God did not give Aaron a choice.

On to Egypt did the two brothers go,
They made their request, but Pharaoh said, “NO!”

Oh how did Pharaoh make a great blunder,
God reached out His hand against Egypt with great wonder.

For ten plagues against the Egyptians would unfold,
Let’s learn them in order in which they are told.

Water into blood was the first plague the Egyptians would have to bear,
Then masses of frogs came because Pharaoh would still not hear.

Next. the land was infested with lice, and later swarms of flies,
Pharaoh made promises to let the people go, but they were only lies.

The next two plagues to come were the dead livestock and boils,
Still the people were not freed from Pharaoh’s coils.

Then came the plague of hail and fire,
This did not change Pharaoh’s evil desire.

Locusts came and swarmed the land,
Pharaoh continued to lie and did not fear God’s hand.

The ninth plague was darkness over Egypt, which made Pharaoh’s anger burn,
He bid dear Moses to take the Hebrew people and never to return.

This again was a lie that Pharaoh told,
So would come the final plague that would be the most bold.

The plague of the firstborn would our Lord bring,
Oh how on the land of Egypt this deadly plague would sting.

The Hebrews were protected through the blood of the lamb over their door,
A symbol of Jesus Christ, for this was His war.

At midnight God smote the firstborn, including Pharaoh’s son,
The Egyptian ruler was broken and declared the Lord’s battle won.

The child of Israel were finally set free,
Then Pharaoh’s heart hardened and he chased them to the Red Sea.

God instructed Moses to stretch out his hand and the waters parted,
The Hebrews passed through, but Pharaoh refused to be outsmarted.

Into the sea did the Egyptian army rush with all their might,
God tore off their chariot wheels and quickly ended the fight.

For the second time Moses stretched out his hand over the sea,
The waters drowned the Egyptians giving them no chance to flee.

The women danced over the battle that was won.
Great glory was given to God the Son.

The name Moses means “to draw out”, which is exactly what we see Moses doing throughout his life (Exo 2:10).

Moses was the most meek and humble natural man to walk the face of the earth during his lifetime, which is likely one of the reasons God chose him (Num 12:3).

What are some of your characteristics that God may be trying to use for His great purpose?

Joel M. Bauer is a 45-year-old U.S. Army Veteran from Dunn, NC, which is just outside of Raleigh. After being honorably discharged from the U.S. Army, he attended school at Taylor University, a Christian liberal arts school, in Fort Wayne, IN, where he received his BS in social work and psychology. He has worked in such places as a homeless shelter, a community based treatment center for severe mental illnesses, a school for troubled students, and other social service agencies. His current endeavor is to build The Bottom Line website into a site that inspires both Christians and non-Christians alike, and brings glory to God.
Previous King David’s Example: A Different View
Next Exposing the Enemy in the Confederate Flag Controversy