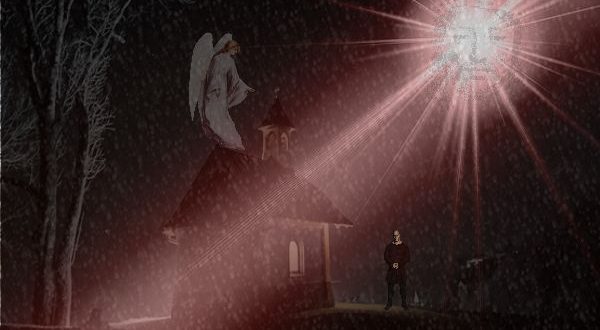 ‘Twas The Night Before A Real Christmas

‘Twas the night before a real Christmas and all through the house
God’s Spirit was not stirring … His Spirit had been doused
The decorations were hung with little love but with great care
So, the spiritual cupboards were all quite very bare
The children were asleep having failed to stay awake
To catch Santa eating the cookies they together all had baked
They dreamed of presents, of dolls, candy, and sleds
No thoughts of Christ’s birth ever entered their heads

Mama was wrapping presents … Me putting together the sled
There was no time for Jesus … Good cheer we had to spread
Then all of a sudden, I heard a sound that gave me much caution
It sounded like it was coming from outside in the garden

I ran to the window to see what on earth had caused this fright
Peering through the blinds, I could see not so clearly in moonlight
Through the falling snow sparkling bright as it fell
I saw seven figures all dressed in white as they knelt

I ran to the doorway, so I could get a better gaze
Upon opening the door, an angel met me in my haze
He said … I bring a heavenly chorus with a message to bring
Then the seven figures arose and their message they did sing
So haunting, yet so beautiful … Not from earth was this sound to my ears
It was an angel chorus singing God’s Son would soon be here
I suddenly in my stomach, began to feel very sick
I would have expected anyone but this … Maybe even Old St. Nick

So majestic and brilliantly did Christ suddenly come
With a star in the east shining bright red as the sun
He called me by name and asked me …“Why don’t you believe?
“For your eternal soul,” He said, “do I mournfully grieve.
Two thousand years it has been since of a virgin I came;
I died on that cross so you could be without any blame.”
And then in a twinkling … I heard on the roof
An angel there saying, “I’ll give you even more proof.”

As I turned back to Jesus … Jesus was suddenly gone
There standing instead in His place, were Mathew, Mark, Luke, and John
They were dressed all in sack cloth from their head to their foot
They were all tarnished with ashes and covered in soot
The angel then said, “In mourning they fast and they pray.”
He said, “They also died so you could know The Way.”
I flung myself down … Down flat on the ground
Realizing how lost I was and needed to be found

Then I heard a voice whispering softly into my ear
“Fear not,” He said, “for your Savior has come near.”
I lifted up my eyes to see Jesus standing there
With a tear in His eye and a twinkle not found anywhere
He was dressed in white … So bright was the sight
He stretched out His right hand … I grabbed hold of the light
He looked like purity as His Holy light shined
I rose to my feet … He was so loving and so kind

As I lowered my head … I asked Him, “Please forgive me.”
He said, “You were once blind, but now you can see.”
Then with a wink of His eye and a twist of His head
Gone He was and the star that shone so red
I heard the angel say as he too faded away,
“Good tidings to you; Spread His joy this Christmas Day.”

So, I gathered up the kids and I woke up Mama
I dusted of my bible and said, “Forget about Santa.”
I read from Luke and then I read some from John
I told them of Christ’s birth and the events on the lawn
We prayed together and worshiped the One who appeared
Instead of worshiping Santa—The gifts—Some elves and reindeer

What will you focus on this Christmas Eve? How can you make Christ the center of your family’s celebration?

(adapted from the original poem by Clement Clark Moore; better known as “Twas The Night Before Christmas”)

I am a layperson with 35 yrs. of teaching Sunday School, bible studies, and preaching on occasion. I teach a bible study in a local prison. I am a 36 yr. counselor/social worker. I am disabled and have devoted the past four years to studying, praying, and writing about my greatest love; this gospel of Jesus Christ that has the power to save a man's soul. I also write devotions for a Church in Marion, VA and I write for an orphanage/ministry in Zambia, Africa.
Previous I Heard A Voice On Christmas Eve
Next Suzy meets the Grumpy Ghost on Christmas Eve (Poem)