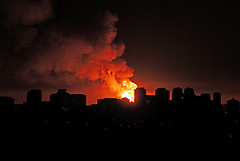 To have a Christian worldview is to view the world as Christ does. The way we attain this is not by viewing the world, but by seeing Christ and being changed into His image as we behold His glory. Only when we become like Him in nature will we be able to see as He does. For this reason, the chief devotion of every Christian should be to see the Lord as He is, not as we want Him to be, and to keep Him as our first love and first devotion. ~Rick Joyner, Senior Pastor of Morning Star Fellowship Church

Just like Peter, walking on the water, we must keep our eyes on Jesus to stay afloat. The world is filled with terrifying news. Thousands of alien children flocking to our southern border. Which are innocent refugees fleeing the violence of their homeland and which are gang members, ready to spill American blood? What should we do? Grant asylum or send them home?

Statistics tell us that in 20 years the Muslim population will dominate Europe, Canada, the United States and Australia. As a nation built on democracy, will we then see the majority vote for Muslim leaders? Will we become subject to Sharia Law – the ultimate goal of Jihad? Will we fear Muslims enough to react in hate, or seek God’s protection while displaying God’s unconditional love?

Last week, Israel launched a ground offensive in the Gaza Strip region. A Malaysian airline was shot down over Ukraine, with 295 souls leaping into eternity. Chaos and terror swirl around us, at home and abroad. Do we react with fear and hate and retribution? Or, do we respond with God’s love and seek his wisdom as James urged. (James 1:5)

Thomas Paine wrote, “These are the times that try men’s souls,” in the months following the American colonists’ Declaration of Independence from England, the superpower of its time. Current events truly try Christian souls. The choice lies within us. React — or respond?