Breaking News
Home / Politics / Is the Pope a Political Prop? 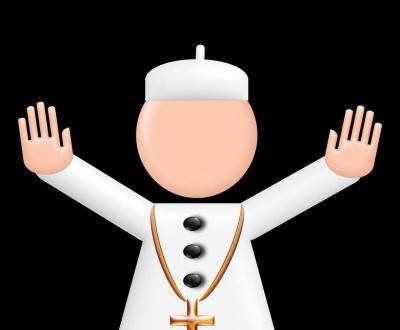 Is the pope a political puppet?

Is the Pope a Political Prop?

He’s been dubbed “The People’s Pope.” Of course, “people’s pope” conjures thoughts of People’s Republic of China, the people’s proletariat, and other institutions of Marxism/Communism in which the common man really has no voice. Then there was Saul, the people’s choice for king, when God’s people decided they no longer wished to trust and communicate with Him directly (1 Samuel 10:19). We know how that turned out.

Pope Francis received a rock star welcome from first Cuba, and then Cuba’s newest buddy, the United States, upon his arrival in Washington on Wednesday, September 23. What was the first thing the pontiff addressed in a world that is falling apart at the seams? The fact that we’re living in the worst economy since the Great Depression? The dramatic increase in violence worldwide? ISIS beheading children? The plight of the fatherless? No. The people’s pope offered this as his prime directive:

“Accepting the urgency, it seems clear to me also that climate change is a problem we can no longer be left to our future generation.”

Surely the Successor of the Prince of the Apostles must have been referring to the abysmal Iran Nuclear Deal that is certain to bring about rapid climate change.

If Global Warming – er, climate change – is weighing so heavily on the heart of the Primate of Italy, then why didn’t he bring it up a couple days ago in Cuba? In Cuba, the Pope took pains to avoid the totalitarian politics of Communism, thus kowtowing to the Castro regime. José Daniel Ferrer, leader of the Patriotic Union of Cuba said when he was kept from meeting the People’s Pope:

“It simply doesn’t appear to us to be right or just that the pope doesn’t have a little time to meet with those Cubans who are defending human rights.”

Journalist Edward Morrisey highlighted Obama’s exploitation of the current Pope in a March 2014 article he wrote, saying this, “Obama has linked Francis to his efforts to fight income inequality [i.e. promote socialism], explicitly invoking the pope in a big economic speech last December. The president instructed his speechwriters to include the reference, hoping to leverage the pontiff’s focus on the Catholic Church’s doctrine on social justice.”

So in essence, Obama capitalized on the Pope (if you’ll forgive the pun assigned to two anti-capitalists).

Pope Francis, if he found out, is apparently a willing victim. Flashing his Jack O’ Lantern smile, the so-called Vicar of Jesus Christ walked up the red carpet and praised the president, saying “Mr. President, I am finding it encouraging that you are proposing an initiative for reducing air pollution, accepting the urgency. It seems clear to me also that climate change is a problem which can no longer be left to future generations. When it comes to the care of our common home we are living at a critical moment of history.”

The lovefest continued, with Obama lavishing his own praise on the Pontiff:

“You remind us that in the eyes of God our measure as individuals, and as societies, is not determined by wealth or power or station or celebrity, but by how well we hew to Scripture’s call to lift up the poor and the marginalized, to stand up for justice and against inequality, and to ensure that every human being is able to live in dignity – because we are all made in the image of God,” Obama said.

“You shake our conscience from slumber; you call on us to rejoice in Good News, and give us confidence that we can come together, in humility and service, and pursue a world that is more loving, more just, and more free.  Here at home and around the world, may our generation heed your call to ‘never remain on the sidelines of this march of living hope,’ ” he said.

So, wait a minute. How does Obama’s rousing speech for the marginalized, and humanity as the image of God, mesh with his own vow to Planned Parenthood to defend abortion rights?

Witnessing the proceedings of the past two days brings to mind these words from Jesus:

Does the Pope “belong to the world”?

Emily Tomko's radical encounter with the Lord while at a nightclub changed her life forever and inspired her first novel, College Bound: A Pursuit of Freedom. She is the author of seven books, including 31 Thoughts on Prophecy and Leaving the Shallows: igniting the faith that overcomes the world. Her tastes tend toward vintage and she's a Germanophile, having spent a year in Bremen and Nuremberg. Emily loves the scriptures and writes with fierce compassion and a deep desire to see people freed from the miry clay of this world and walking in the truth.
Previous Save Your Health, Worry on Wednesday
Next The Real Message of the Four Blood Moons