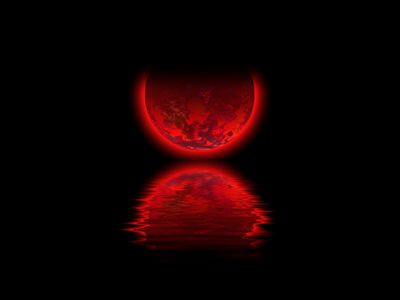 The Real Message of the Four Blood Moons

We are nearing the end of the four blood moons. There are those who would love to say, “See, nothing happened.” However, so much of what happens goes unreported. What does happen may not be obvious, but more “behind the scenes.” Some people need to be reminded about historical precedence for events happening in favor of Israel during each of the previous blood moons of 1493-94, 1949-50, and 1967-68. In each case something huge occurred in behalf of that nation: persecuted Jews found refuge in the discovery of America, Israel became a nation, and they won the 6-day war against incredible odds, respectively.  So, the blood moons scenario has nothing to do with someone’s personal prophecy or being a religious nut. Genesis 1:14 says that God uses the moon as a sign of things to come.

Whatever happens may not occur on the exact day of the fourth blood moon. Maybe some decision has already been made, or some event has occurred that has set the stage for something big to take place. At the time of this writing, Middle East nations are threatening Israel with destruction. There is too much going on for one to say that nothing will happen. Consider the following headlines:

* Analysis:Palestinians prepare drastic moves against Israel and Obama might help them.

*If Israel attacks Iran, U.S. will go against Israel.

*New video out of Iran: Imagine what an Islam invasion of Israel would look like.

There is also the Palestinian State issue, the fierce battle over the  Temple Mount, and the plans that are currently in the works to rebuild the temple.

I think everyone would agree, no matter their views, that there is a political and religious mess in the middle east, with Israel as the target. It is only a matter of time before something does happen! Every national leader involved in this chaos has his or her own agenda as to what they want to see happen. God, however, has a divine plan that overrules anything a national leader desires or is capable of doing. The events in the Middle East are going to play out exactly as God intends. He is the divine mediator, and will interrupt man’s plans in such a way that the world will wonder what happened. We may not learn of what happened until after the fact. God will have the final say. He will intervene on behalf of Israel and curse those who have cursed that nation. God can block the decisions of humanity. He can cause events to go against the will of world leaders. Isaiah 14: 24-27 aptly states: “…Surely, just as I have intended so it has happened, and just as I have planned so it will stand…This is the plan devised against the whole earth, and this is the hand that is stretched out against all the nations. For the Lord of hosts has planned, and who can frustrate it? And as for His stretched-out hand, who can turn it back?” This is the real message of the four blood moons.

Will God protect Israel as he did during the Hamas conflict, when enemy missiles were supernaturally deflected? Will Israel win the battle over the Temple Mount? Will God stop approaching armies dead in their tracks? Only time will tell. Whatever happens, the credibility of the four blood moons scenario will be verified. What do you believe will happen in relationship to Israel for which the blood moons are a sign and warning?

John Livingston Clark is 67 years of age and lives in central Washington State. He has written two published books, and two published poems. His initial book is called, " God's Healing Hope: Breaking the Strongholds of Wrong Thinking." His second book, released in December of 2016, is a motivational book written to seniors titled, " Seniors: Are You Retiring or Recharging?" Both books are available on amazon. You can also view his writings on www.faithwriters.com. John is available to speak on a variety of topics. Visit me at jclarkministries.com
Previous Is the Pope a Political Prop?
Next What Will The New Heaven and Earth Be Like?