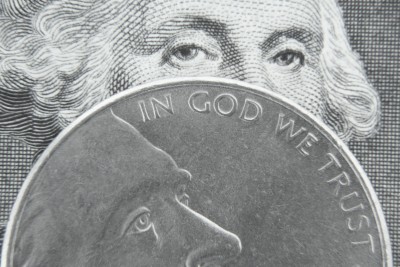 Living the words: In God we Trust

Times of unrest have great potential for building faith–individually as well as nationally.  Words without substance are deadly;  life dusts off our pretenses.  That is something to celebrate!  The history of “In God We Trust” reveals the process beautifully!  Just seven months after the first shots were fired in the Civil War (1861), fear of historical infamy prompted a Pennsylvania minister to write the following to US Treasury Secretary, Salmon P. Chase:

“You are probably a Christian.  What if our Republic were not shattered beyond reconstruction? Would not the antiquaries of succeeding centuries rightly reason from our past that we were a heathen nation? … This would make a beautiful coin, to which no possible citizen could object. This would relieve us from the ignominy of heathenism.”

Fearing that the nation might destroy itself and be totally misunderstood as a heathen nation, Chase begged for lasting documentation of a nation that trusted God.   His letter, along with similar pleas from citizens prompted the US Treasury to pay homage to God on coinage in the 1860s.  Nearly 100 years passed before “In God We Trust” became the official US motto. US coins have included the motto continuously since the early 1900s and paper money has honored God with the words since 1955.

Despite modern revisionism of American History that claims secular roots, the desire to honor God did and does drive many in America.   Following numerous tragic, deadly incidents between police and citizens, “In God We Trust” began appearing on the back of police cars.  No one can pinpoint the start of the bumper sticker campaign, but newspapers, controversy, small businesses and even Facebook serve to keep the movement alive.  The record of a God-honoring nation continues to be documented.

Police agencies in Florida, Mississippi, Missouri, North Carolina and Virginia are using the national motto on their vehicles.  Despite protests and complaints by some, the overwhelming majority of citizen comments affirm the desire to honor God.  As Florida Sheriff Frank McKeithen 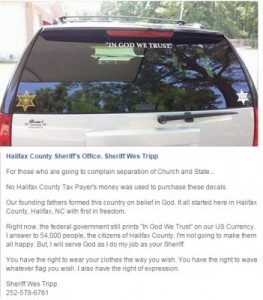 says, “Morals and ethics — that’s kind of what law enforcement’s supposed to be about.” At this agency, “we still pray. We pray before we go to a horrible situation where we think someone could get hurt or killed.” Faith conquers fear every time!

“ … I will serve God as I do my job as your Sheriff.”  Halifax County, NC Sheriff Wes Tripp

As a nation, we must place our trust in the Creator and live that trust without fear! As individuals, we must do the same. Words must be lived out.  Let us pray for, follow the example of and rejoice in all who live their faith!

“Whatever our life work, let us do it as serving God.  And whatever you do or say, do it as a representative of the Lord Jesus, giving thanks through him to God the Father. ” Colossians 3:17

What will you do to show your faith is alive?

Billie Jo is wife to Craig and mom to Rusty and Riesa. Formerly employed in the human service industry, the past fifteen years have been dedicated to homeschooling. She is a freelance writer for a number of print and internet publications. She is also passionate about serving in the community. She works in a GED preparation ministry and a community-based servant program that provides opportunities for youth to serve others. It is passion for the love of Jesus and His transforming work that motivates her writing and serving. "I love to see God at work in the lives of others and this is the way I see best."
Previous Our Hope: Water Turned To Wine
Next Finding the Good Investor