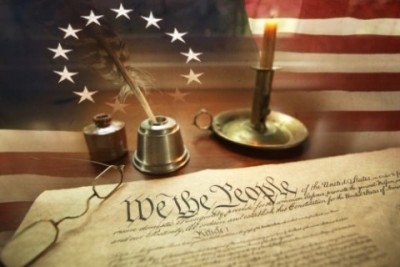 Go, therefore, and make disciples of all nations, baptizing them in the name of the Father and of the Son and of the Holy Spirit,  teaching them to observe everything I have commanded you (Matthew 28:19-20)

Can a nation founded on undeniably Christian principles evolve to an enlightened state absent of all religious influence? Can those intent on doing so, eradicate from our heritage all mention of the faith of the settlers when they ventured to this “New World?”

They can, only if we allow it. The founders of our country wove Christianity into the fabric of America as evidenced by the powerful words of this nation’s earliest documents.

A visit to the Pilgrim Hall Museum to review the Mayflower Compact leaves little doubt. It begins, “In the name of God, Amen.” It continues, “Having undertaken for the Glory of God, and Advancement of the Christian Faith, and the Honour of our King and Country… solemnly and mutually in the Presence of God and one of another, covenant and combine ourselves together into a civil Body Politick, for our better Ordering and Preservation, and Furtherance of the Ends aforesaid;”

Their dangerous excursion, borne out of the Christian faith, led to the formation of a nation independent of the Royal Crown. Christianity was central in the lives of those who sacrificed life and livelihood for the divine purpose of liberty. The Declaration of Independence “holds these truths to be self-evident: that all men are created equal; that they are endowed by their Creator with certain unalienable rights; that among these are life, liberty and the pursuit of happiness.”

Thomas Jefferson, whom the Freedom from Religion proponents identifies as their champion of church-state separation, etched into our Constitution the noble purpose of promoting God-given liberty. Read the Bill of Rights Amendments ratified in 1791, to see that it begins with the explicit instruction that the people of this new nation shall be free to worship as their conscience dictates – not the government.

Nowhere does it state or imply, that religion must remain segregated from the lives or discussions of public servants. The 1st Amendment ensures our freedom to express religious beliefs, not to be “protected” from any mention of them. The authors of the amendment did not fear religion. They feared the loss of freedom.

John Adams viewed faith and religion as a necessity for a representative republic. “Our Constitution was made only for a moral and religious people. It is wholly inadequate to the government of any other.” It is the tyranny of government they feared. “Because power corrupts, society’s demands for moral authority and character increase as the importance of the position increases.” John Adams

This year Kentucky legislature passed overwhelmingly (80-14), and Governor Matt Bevin signed into law the Bible teaching as an elective. Follow the link to read a summary of HB128. Perhaps it is the first of many answers to prayer that the United States understand and respect our heritage as a nation.

Today, it is “tolerance” that we are instructed to hold in high regard. However, James Madison objected publicly to this terminology. He believed it gave the dangerous implication that religious liberty was a privilege granted and therefore could be revoked at the discretion of the state. George Mason, who wrote the original draft of the Virginia’s Declaration of Rights, made the appropriate changes to declare that religious liberty is a right, not a privilege. His rewrite had an impact on other state constitutions as well as the Bill of Rights.

The cherished documents of our nation’s birth reveal the character of the men and women who envisioned the potential of America when it was in its infancy. Their timeless words also tell us how truly magnificent yet fragile they knew it to be. This noble experiment of a government of the people, by the people and for the people.

If possible, to the best of your ability, live at peace with all people. (Romans 12:18)

How can a nation that embraces religious liberty “tolerate” religions that do not? How does teaching the Bible as an elective in public schools support or violate the Constitution?

Melinda is currently the worship leader at her small church in rural America. Married for 23 years, she and her husband Larry have one son. She is the Director of Mailing in the print/mailing industry by day and freelance author by night. Her desire to write is a passion borne from tragedy. God used it to take her faith to a much deeper level. Melinda is a freelance writer and member of FaithWriters. She joined the TBL team in March 2014. Believing we are citizens of a greater ‘kingdom,’ her articles for The Bottom Line examine governmental responsibility, citizen involvement and current political topics. With the great wisdom contained in scripture as her guide, she looks at today’s political environment from a Biblical perspective. She prays her words will prompt the reader to view citizenship - and every aspect of their life, through the eyes of faith. Col 3:17 To read more of Melinda’s writings on her faith, hope, and life visit her blog Still Living Still Loving or her page at Faithwriters.com. You can also follow her on Twitter @MKZbk.
@@MKBzk
Previous The Moldy Miracle
Next The Threshing Floor