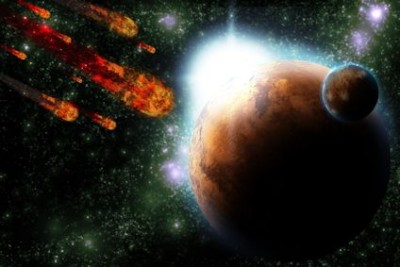 Is A Devastating Solar Storm Headed Our Way?

On July 23, 2012, two giant clouds of charged particles from the sun narrowly missed the earth! These emissions, called Coronal Mass Ejections, are capable of destroying the earth’s magnetic field and frying communication lines. It would cause widespread blackouts. Though strong solar storms are not rare, because of more and more technology there is the potential for greater destruction, especially with space satellites.

Ashley Dale, a solar scientist at Bristol University,  said it is only a matter of time before such a storm hits our planet. These happen about every 150 years, and one is now five years overdo. There is a 12 percent chance of a huge solar storm striking earth within the next decade, but the largest sun-spot in 24 years has aligned itself with earth! Highly unusual activity on the sun’s surface has already propelled solar flares toward our planet. Dale went so far as to say that “as a species, we have never been more vulnerable to the volatile mood of our nearest star, but it is well within our ability, skills, and expertise as humans to protect ourselves.” However, according to an article published by Nathan Rao of Express News, “The earth could be the target of an explosion equivalent to 10 billion Hiroshima bombs exploding at the same time.” It would affect virtually every basic service to humanity.

How does all of this line up with scripture, or does it? God is going to create a new heaven and a new earth, as stated in Revelation 21:1 and 5. “And I saw a new heaven and a new earth; for the first heaven and the first earth passed away…And He who sits on the throne said, ‘Behold, I am making all things new.'” How God will do this, of course, is an unknown, and open only to speculation. Is this to be taken literally or symbolically? It does say in II Peter 3:10-12 that a day is coming when “the elements will be destroyed with intense heat, and the earth and its works will be burned up.” What this refers to is open to interpretation. One thing is for sure: God is going to bring some type of dramatic change to our planet, and He has everything at His disposal in the universe to do it. After all, He created it and is over it all. Would he use a strong solar storm to do it? What do you think?

John Livingston Clark is 67 years of age and lives in central Washington State. He has written two published books, and two published poems. His initial book is called, " God's Healing Hope: Breaking the Strongholds of Wrong Thinking." His second book, released in December of 2016, is a motivational book written to seniors titled, " Seniors: Are You Retiring or Recharging?" Both books are available on amazon. You can also view his writings on www.faithwriters.com. John is available to speak on a variety of topics. Visit me at jclarkministries.com
Previous Strangers, Pilgrims, and Aliens: A Christian’s Life
Next Miss Colorado, Kelly Johnson–Not Just A Nurse