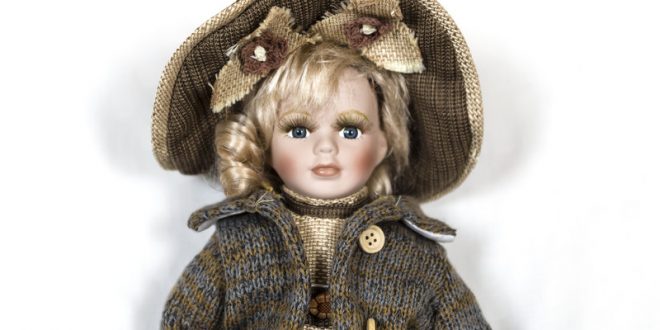 Minnie was eight years old in 1912 when her photograph was taken. She wore a cream-colored dress with a large sailor’s collar, three pearl buttons sewn on the fabric.  A pointed, cloth bonnet covered her hair, her braids peeking out the sides. She wore dark stockings over her legs.  There was a faint smile on her face and leafless trees in the background. Minnie held a beautiful porcelain doll dressed in a silky pink gown and matching bonnet. The doll had a beautiful, hand-painted face and bright eyes that opened and closed. Minnie looked like any young girl of her era holding a cherished doll, shiny and new.

The little girl in the faded photograph eventually grew into a young woman.  She married and raised a large family of her own and later enjoyed a parcel of grandchildren, some of whom likely played with the same doll. Minnie passed away at age 91.

Her doll has been tucked away in an attic for many years. Its little dress faded, and the bonnet wrinkled with time, but the doll hasn’t changed much. She would be a lovely companion for a little girl today, until time eventually takes its final toll.

Time will eventually take its final toll on everything created on earth.  Living creatures as well as the possessions that people accumulate will all pass away.  May we remember,  as the Psalmist did, that every day we live on earth is a gift:

“Show me, Lord, my life’s end and the number of my days; let me know how fleeting my life is.  You have made my days a mere handbreadth; the span of my years is as nothing before you. Everyone is but a breath, even those who seem secure.”  Psalm 39:4-5

We all have items passed on to us that once belonged to someone long gone. The possessions have outlasted their owners. A good reminder to us that our lives really are a mere handbreadth in time. Shows us, Lord, how to live each day wisely.

My husband Dan and I have three children and three grandchildren. We live in central Illinois. I am a graduate of The Institute of Children's Literature, a member of faithwriters.com, and a member of SCBWI. My writings have been published at chirstiandevotions.us, in DevotionMagazine, the PrairieWind Newsletter, and here at thebottomline.co.
Previous Grace…the Power Not To!
Next Thief of Your Heart