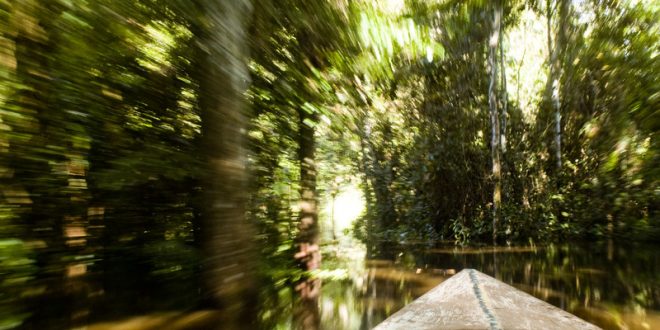 Navigating the River of Doubt

In early 1914, Theodore Roosevelt was looking for a new challenge after failing to win a third nomination for President. Along with his son, Kermit, and Brazilian explorer Candido Rondon, Roosevelt set off to explore the River of Doubt in the Amazon forest of Brazil.

If the former President wanted an adventure, he had found one! The River of Doubt flowed through jungles of humid rain, hitting the leaves on overhanging trees until the sound became maddening.  Roosevelt’s homemade canoe flowed just inches above water infested with piranha and anaconda, all waiting for a meal. Mosquitoes ate at the flesh of the traveling men, often carrying Malaria in their bite. Termites devoured anything—including the explorers’ underwear! They felt as if they were being followed by unseen eyes, hearing the voices of tribesmen in the forests at night. Before the exploration was finished, Roosevelt developed a raging infection from a gash on his leg and nearly died. He would carry Malaria in his body, where it would occasionally manifest in fever and chills, for the rest of his life. It seemed that doubt was all that river offered, wrapping its cold arms of fear and hopelessness around the men.

In our lives, doubt may not come in the form of navigating a jungle river with danger at every turn, but it comes in the form of sudden illness, financial strain, hurting children, and many other unknowns.

Psalm 138:8 is a comforting verse that reminds us that God’s plans for His followers will come to pass. It speaks truth: that we can always find peace when we take His Hand and let Him lead us where we cannot see the way, because of His great love for us.

After weeks following the River of Doubt over four hundred miles, Theodore Roosevelt sent his waiting wife, Edith, the following telegram: “Successful trip.”  Life has its share of unknown journeys for each of us…What will you do when doubt creeps in? Will you trust in the One Who sees the way ahead and loves you completely, so that at your journey’s end you can say with that famous, brave explorer, “successful trip?”

My husband Dan and I have three children and three grandchildren. We live in central Illinois. I am a graduate of The Institute of Children's Literature, a member of faithwriters.com, and a member of SCBWI. My writings have been published at chirstiandevotions.us, in DevotionMagazine, the PrairieWind Newsletter, and here at thebottomline.co.
Previous All Alone on Valentine’s Day (Poem)
Next Number Your Days!