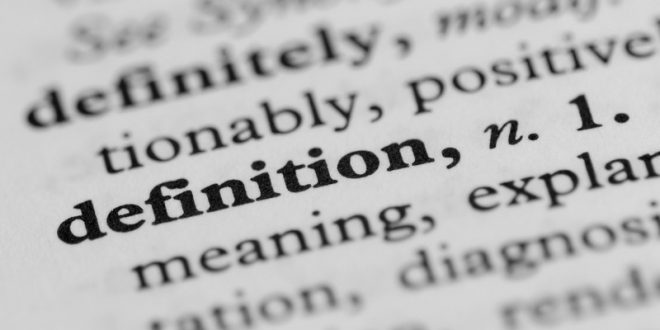 The attempt at re-defining truth is a part of our culture today.  But try as one might, those unconditional truths found in God’s Word will remain the same.

One man who based his life’s work on the truths found in the Bible was Noah Webster. Well educated, Webster held several titles:  lawyer, politician, schoolmaster, author. In 1807 he began his life’s work, a twenty-one year effort to compile a new dictionary.    When completed, Webster’s 1828 Dictionary contained 34% scripture. Let’s compare several key words from its pages with their modern definition…

Webster’s defined marriage as the act of joining a man and woman for life.  {Hebrews 13:4}  Today’s definition of marriage states that it is the legally or formally recognized union of two people as partners in a personal relationship.

In the original Webster’s of 1828, God is  defined by Noah Webster as The Supreme Being: Jehovah; the eternal and infinite spirit, the creator, and the sovereign of the universe.  {John 4:24}  Today’s definition of God is:  in Christian religions the creator or ruler of the universe.

Webster’s Dictionary defined truth as conformity to fact or reality; exact accordance with that which is, or has been, or shall be. {Proverbs 8:7} As one might imagine, truth has taken on a new definition today as well:  a fact or belief that is accepted as true.

Sadly, we  live in a time when words like marriage, truth, and God have taken on new meaning.  But  absolute truth does not change over time, at the whim of a culture:

“It is written and forever remains written, ‘Man shall not live by bread alone, but by every word that comes out of the mouth of God.’  Matthew 4:4

Where do you look for lasting truth? Consider what  one famous dictionary writer penned:  “God’s Word, contained in the Bible, has furnished all necessary rules to direct our conduct.”

My husband Dan and I have three children and three grandchildren. We live in central Illinois. I am a graduate of The Institute of Children's Literature, a member of faithwriters.com, and a member of SCBWI. My writings have been published at chirstiandevotions.us, in DevotionMagazine, the PrairieWind Newsletter, and here at thebottomline.co.
Previous The Value of the Gospel of Grace
Next Help Me To The End Of My Sin