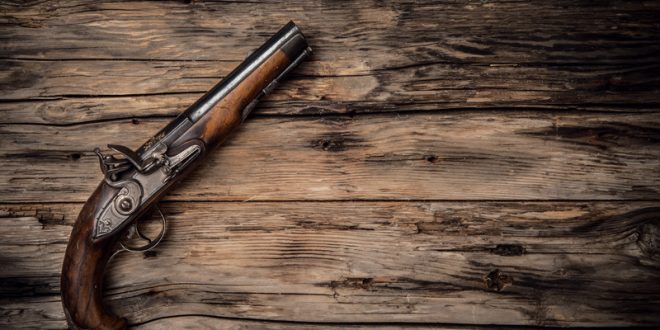 The Duel of Forgiveness

It happened on a summer day in 1882, an argument between two friends. Both men were wealthy, living in a midwestern city where enterprise was abundant for men who could handle the challenge. One was a landowner who had invested in his city by purchasing land for the development of new neighborhoods. He also owned a farm outside of town and had much stock. The other man owned successful stockyards within the city limits where he housed animals for locals who were in the process of transporting them.

The argument started with heated words about how much the land developer owed his friend for keeping his farm stock. A payment had been made, but the man wanted to move his stock a few days before the final payment was due. As arguments often do, this one became heated until the stockyard owner produced a pistol and a threat towards his friend to leave the premises without his animals until he could pay. The friend moved towards the gates to retrieve his stock anyway when a shot rang out and he was mortally wounded.  As he lay dying, he forgave his distraught friend and requested of the authorities not to seek prosecution.  The city’s newspaper led his obituary with a tribute to his kind and forgiving heart.

Today, there are reminders around the city of his success and contributions, including a street named in his honor. Still, what most remember about him is the forgiveness he extended to his friend. He had won the real battle that day.

Extending forgiveness can leave you feeling vulnerable and in pain, like showing up to a duel without a pistol. But Proverbs 17:9 says in part that when we cover and forgive another’s transgression against us, we choose love. Like the wounded man who could have demanded the life of his friend for his own, we can instead choose to forgive and leave retribution to God.

Forgiveness can feel like a battle within, so strong at times that withholding it seems the easier choice. But the reward of peace that it brings is worth the pain. Will you win the duel of forgiveness?

My husband Dan and I have three children and three grandchildren. We live in central Illinois. I am a graduate of The Institute of Children's Literature, a member of faithwriters.com, and a member of SCBWI. My writings have been published at chirstiandevotions.us, in DevotionMagazine, the PrairieWind Newsletter, and here at thebottomline.co.
Previous Distracted Christians–A Weapon for the Enemy
Next Is Your Heart Right?