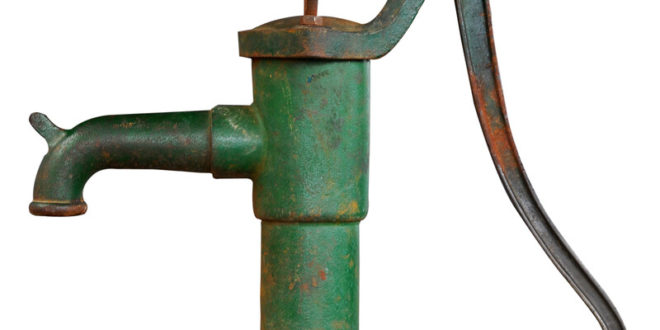 Dr. John Snow was determined to figure out the riddle that was Cholera, a dreaded disease that caused horrible diarrhea, quick dehydration, and a very painful death– if you came down with Cholera after breakfast you could be dead by supper time!

In 1854 London, Snow went to work, believing that Cholera was water borne. He was able to whittle down the sources until, finally, he honed in on the Broad Street water pump. It looked innocent enough, but…

As horrible as the thought of drinking tainted water is to us, sanitation in the 19th century was not understood, and the River Thames in London was the water source for its population. Sadly, some folks who used the Broad Street pump grew fond of the taste, their senses dulled over time.  One woman came to love the water so much that she bottled it and took it with her on a journey to visit family, promptly causing severe illness in those she loved. Maybe her nose became so familiar with the rotten egg smell and the cloudy, brownish color, that she didn’t believe it could cause her any harm. It was too late when she finally realized her folly.

Sin can be a lot like the cool water from the old Broad Street pump on a hot summer day. Looking so harmless at first glance, it beckons one to partake of what it offers. Perhaps the first few swallows are difficult, but soon the senses become dulled.  Pain and suffering enter our lives and the lives of those we care about, threatening not only our own spiritual health but that of those around us who are influenced by our choices.

The invitation to sin is strong and the only way to win the battle is with God’s grace and help:

For there are many, of whom I have often told you, and now tell you even with tears, who live as enemies of the cross of Christ [rejecting and opposing His way of salvation], whose fate is destruction, whose god is their belly [their worldly appetite, their sensuality, their vanity], and whose glory is in their shame—who focus their mind on earthly and temporal things.  Philippians 3:18-19

When we choose to give in to the temptation, we oppose the way of salvation. Satan doesn’t want us to be aware of this truth, but God reminds us in His Word. When sin beckons you, promising satisfaction and fulfillment, run to God instead.

My husband Dan and I have three children and three grandchildren. We live in central Illinois. I am a graduate of The Institute of Children's Literature, a member of faithwriters.com, and a member of SCBWI. My writings have been published at chirstiandevotions.us, in DevotionMagazine, the PrairieWind Newsletter, and here at thebottomline.co.
Previous Faithfulness: The Seventh Fruit of the Spirit
Next The One Perfect Love