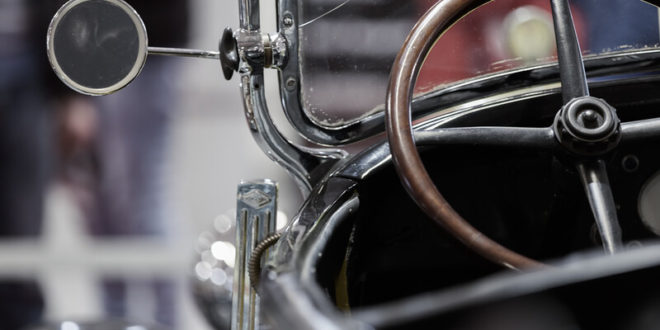 Ray Harroun was the first winner of the Indianapolis 500 in 1911; he was also the creator of the rearview mirror. Ray needed something to replace his 160-pound mechanic, who rode with him to help in navigating the twists and turns of the race track, but also added unwanted weight to his racer!

You could say that the rearview mirror has come a long way since that time. No longer just a way to see where you came from, and what is coming up from behind, it is often equipped with a button programmed by a tiny computer chip inside, allowing you to conveniently open and close your garage door while staying out of the weather. Side mirrors have little yellow lights that blink when you are turning right or left, and blind spot warning lights so you never have to turn your head in order to shift lanes safely. Ray Harroun would have marveled at these modern pieces of equipment!

The ability to see what is behind us, to know where we have come from, and to see what may be gaining on us in order to make safe decisions is important . Try driving a six-lane interstate highway without the aid of your rearview mirror! It’s just as difficult to navigate life if you never look back or consider where you have traveled from to get to where you are currently. The trouble comes when the focus is too much in the past, a vain attempt to change something that has already happened.

No one knew this better than Job, a man who lost everything he owned and all of his beloved children. He must have longed in his grief to look backwards, even wondering what would have happened to his cattle, his land, and his dear children had he been there. Could he have changed the outcome? In the end, he put his faith once again in his Maker and trusted Him with what he could not control with any amount of strength. He learned through his pain that God had determined a path for him, and that He was in control. The same is true for all of us:

“Since his days are determined, The number of his months is with You (in Your control), And You have made his limits so he cannot pass (his allotted time).”  Job 14:5

The windshield of a vehicle is much bigger than the rearview mirror, so we can see what is in front of us and where we are going. God wants us to focus more on the future than on the past. When both our past and our future are given over to Him, we are on the right track!

My husband Dan and I have three children and three grandchildren. We live in central Illinois. I am a graduate of The Institute of Children's Literature, a member of faithwriters.com, and a member of SCBWI. My writings have been published at chirstiandevotions.us, in DevotionMagazine, the PrairieWind Newsletter, and here at thebottomline.co.
Previous Holiness Fits The Saint
Next The Ninth Fruit of the Spirit: Self-Control