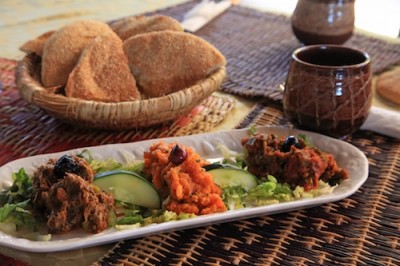 Change the Way You Entertain

Martha often gets a bad rap among Christian circles. Placed side by side with her sister, Mary, Martha is often seen as the disgruntled, impatient, distracted worry-wart who has her priorities all mixed up. And while that may be true in some respects, there is still much to be learned from this busy bee: the lengths one should go to extend hospitality.

A team from my church just returned from a two-week missions trip to Tanzania, Africa, and among the many things that struck them was the level of hospitality. Though the people had nothing but mud walls and makeshift sleeping arrangements, the hosts would pull out all the stops—spending the equivalent of hundreds of American dollars—to see their guests well-fed and well-entertained.

An eight-course meal—with ample opportunity for seconds—in a poverty-stricken village in south Africa? It happens.

Had even one of our church members extended financial support to cover their costs, the host would have been offended. They took pride in entertaining their guests and filling their stomachs with homemade, authentic cuisine. It was an honor.

Though they had little, they gave much.

Martha embodied that level of hospitality, and whether the Tanzanians knew it or not, they were emulating her example:

Luke 10:38 says, “As Jesus and his disciples were on their way, he came to a village where a woman named Martha opened her home to him.” You can entertain all you want, but without a welcoming spirit, no one will show up. Jesus frequented Martha’s house on several occasions, and I can’t help but think it was in part due to her enthusiasm to serve. He felt at home there.

Not only did she welcome Jesus, she welcomed in the disciples who were with Him. It appears this wasn’t a planned visit, either. Martha didn’t wake that morning, anticipating Jesus’ arrival. We don’t know how prepared she was, but regardless of what her home looked like and what she could offer as a meal, she still invited the men into her home. With enthusiasm. She saw it as an honor.

Martha Ministered to Her Guests

John 12:2 says, “Here a dinner was given in Jesus’ honor. Martha served, while Lazarus was among those reclining at the table with him.” There she goes again, serving—putting the needs of others above her own. The Greek word, “diakoneō” can also mean “to minister.” Sure, Martha is serving food and drink, but she is using her gift of hospitality to minister to the guests, supplying their needs—whatever they may be (Romans 12:13).

As we enter the month of August, there are several barbecues, picnics, and pool parties to be had. Consider the enthusiasm you embody when you entertain—because hospitality is less about your home and more about your heart. Use your gift of hospitality to turn entertaining into an opportunity to minister to the needs of others. As Martha did. As the Tanzanians did. After all, you have more to give than you think you do.

What strikes you most about Martha’s example?

is a freelance writer and contract copywriter who lives in the seacoast region of New Hampshire with her husband, Eric-Thomas,of five years. She currently serves alongside her mother as the Marketing Director for God’s Girls Christian Store and More, a online retail store serving the southern New England region. Her work has been featured in several print and online publications, and she is the recipient of two Faithwriters’ Editors Choice Awards for her short stories, which are scheduled for publication in the Mixed Blessings series. Her first book, Fragile: 30 Days of Hope for the Anxious Heart, is now available at samanthaarroyo.com. She can be reached at [email protected].
Previous God’s Superior Power: Recovering Aaron’s Rod
Next God of the Little Things