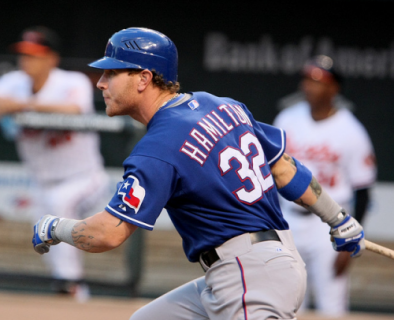 Josh Hamilton breezed into success, seemingly enjoying a charmed life.  Lasting success, though, is not easy…and seldom comes until we reach the end of ourselves.  An outstanding high school athlete, he was chosen as the number one Major League Baseball draft pick in 1999.  A stellar minor league baseball career earned him the honor of being selected Minor League Player of the year in 2000.  With the start of his professional career, Hamilton’s parents had left their jobs to travel with him.  A traffic accident prior to the 2001 season changed all their lives yet again.

While recovering from his injuries, Josh formed friendships with some folks on a dangerous road.  Curious about their passions, Hamilton took his first drink of alcohol the same day he tried cocaine.  That single choice set him on a path toward death.  The path had beautiful spots too.  Hamilton met his wife, Katie.  He returned to baseball.  But the demons of addiction chased him.  The drug-testing policies of MLB held Hamilton accountable for his choices, and he repeatedly made efforts for rehabilitation.  The doorway he entered with that first experiment opened into hell. The charmed life crumbled into ashes.

His career and marriage in shambles, Josh turned to his grandmother.  She confronted his addictions with a challenge for him to surrender his life to Christ.  Hamilton began to read the Bible and pray, but the addictions continued to exert their power over him.  It was a nightmare that opened his eyes to the truth of the battle.  In the dream, Hamilton fought against a man with a cold smirk.  Every time he knocked the dark-clad man down, he got back up and pursued Hamilton until he could fight no more.  Twenty-five years old at the time, Josh surrendered his life to Christ the very next day.  The next nightmare with the devil, Josh and Jesus chased him away together!

Hamilton lives out the truth of lasting success every day.  It is not easy.  Continually aware of his need for the help of Christ, Josh helps others understand the way to claiming the abundant life Christ offers. The promises of scripture thrill the soul but they do not ‘just happen.’

We are more than conquerors (Romans 8:37); I can do all things through Christ (Philippians 4:13); having all self-sufficiency, you may abound to every good work  (2 Corinthians 9:8).

Accountability and effort partner with the promises of God to produce a life of success.  From high school days, friends and fans saw humility in Hamilton.  Today that humbleness shows itself in passionate proclamation of his need for Jesus Christ.  He and wife Katie formed a foundation, Triple Play Ministries, as a vehicle of expressing their passion for Christ.  A member of “I am Second,” Hamilton also shares his testimony through their ministry.  A tag-line on his video offers us a simply acronym to put his experience into play.

Honesty about our weaknesses and needs opens the door.  Truly the strength of God enters when we recognize our need.  Continued open-ness with our need keeps the honesty flowing.  Hamilton travels with an accountability partner and makes no provision for the demons to conquer him again.  He does not rely on his own will-power but on friends and faith in Christ.  A willingness to do what needs to be done is a final characteristic of success.  There is no easy path to greatness.  God’s glory is worth the effort!

Billie Jo is wife to Craig and mom to Rusty and Riesa. Formerly employed in the human service industry, the past fifteen years have been dedicated to homeschooling. She is a freelance writer for a number of print and internet publications. She is also passionate about serving in the community. She works in a GED preparation ministry and a community-based servant program that provides opportunities for youth to serve others. It is passion for the love of Jesus and His transforming work that motivates her writing and serving. "I love to see God at work in the lives of others and this is the way I see best."
Previous Home School Versus Public School
Next Easy Does It!