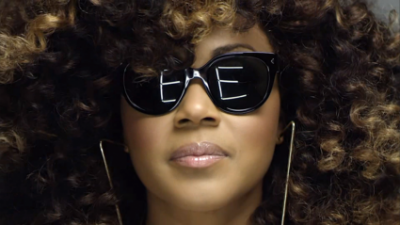 The very controversial song, “I Luh God,” by Erica Campbell is what’s trending in gospel music today. It’s named the number-one digital gospel song in the country. Last week, it topped the Billboard’s Top Current Gospel Chart. Erica Campbell is one of two sisters from the once very popular duo, Mary Mary. You might remember them from their hit single released in 2000 called, “Shackles.” Both sing American contemporary gospel.

I Luh God, is a song about loving God and being forgiven. However, while the message is positive, it’s being delivered through a less than popular medium in the Christian community—rap. The beat is what many would consider secular, and the music video is, let’s say … anything but righteous. In the video Erica and her co-artist, Big Shiz, dress, act, and dance like any secular artist. The focus is not on God, but is instead on looks and self-praise. At one point, Erica even had on shades reflecting the initial “E” in it.

The term now being used for this type of gospel is “Trap Gospel.” This, from the original term “Trap Music,” which is music that emphasizes the beat more than it does the lyrics. One website describes it this way, “The utilization of the musical instruments involved, create an overall dark, harsh, grim and bleak background feeling for listeners.”

The song continues to make waves as everyone chimes in with their opinion. As the song gains popularity, mixed reviews heap higher. One woman posted a video on YouTube calling the song “garbage music.” She further stated that it is nonsense and it sounds like the other worldly music songs by demonic artists. Yet, on that same video, a man contradicts her views and embraces Erica’s song. He said it’s okay if others don’t like the song, but they need not call it sinful.

We sometimes get distracted and seek to please the world instead of God. We want to serve two masters, even though we know the outcome. It’s insane do the same things the world is doing and expect to get a different result. We are supposed to be in the world, but not of the world. Let’s guard our hearts as we strive to be set apart.

“You adulterous people! Do you not know that friendship with the world is enmity with God? Therefore whoever wishes to be a friend of the world makes himself an enemy of God.” (James 4:4)

What do you have to say? Check out the music video above and share your comments below.

Amelia Brown is from the beautiful island of Jamaica. She is a 28 year old Guidance Counselor by profession, but a passionate writer at heart. Most of her articles written are aimed at stimulating positive change under the guidance of the Holy Spirit. She is also a published poet and a member of Faithwriters. Outside of writing, she enjoys volunteering, cooking, and turning frowns right side up. Amelia currently lives in New York.
@ameliambrown
Previous God is the Ultimate Matchmaker
Next A Challenge to Change Your Life