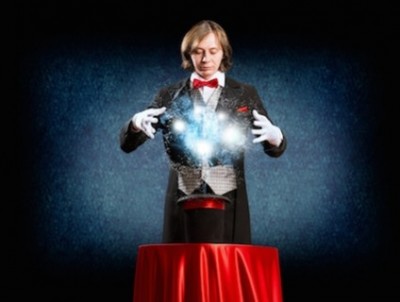 Christianity, Magic, and the Deceiver

This is a famous word associated with the use of magic. It’s said to mean “I create as I speak.” In a child’s world, magic is something that’s fun and amazing. But at that stage they’re experimenting with princes and princesses, unicorns, monsters, fairy-godmothers and magic wands. They are fascinated with fairy tales like Cinderella and her pumpkin-turn-carriage ride, Jack and the beanstalk with his magic beans, and so on.

Magic is said to involve the use of mysterious or supernatural power/forces. It’s also referred to as “spirit science.” But should Christians believe in magic? Are we to actually support the idea that some people are able to move, change, or create using supernatural forces? Christians do believe in a greater power, but it’s not mysterious. Our God is able to do exceedingly, and abundantly above all that we could ever ask for or imagine. (Ephesians 3:20) Although sometimes we may not fully comprehend all He does, we are confident that He’s God, and His powers are the greatest.

Some adults are infatuated with magic as well. Some enjoy watching live magic tricks, while others enjoy watching magic in movies, and many like both. Penn and Taller are well-known comedians who also double as magicians. They’re Las Vegas headliners who tour and often make appearances on television shows. Their style is a mixture of illusion and comedy. Now You See Me, is a movie that came out in 2013 about a team of illusionists pulling off bank heists. They pulled several stunts that at first glance looked magical. But a closer look revealed they only used fancy tricks.

That’s how the devil works. He’s the world’s most infamous magician. He’s a deceiver who uses illusions to entrap. Second Corinthians 4:4 says, “… the god of this world has blinded the minds of the unbelievers, to keep them from seeing the light of the gospel of the glory of Christ … ”

Satan may allude to alcohol drinking or drug usage as something that will make you feel better and forget all your troubles, but that’s a lie. He might make things appear, like a dead relative or friend, who’ll then deceive you into believing ghosts are real—and that they’ll either protect or haunt you. The devil plays tricks on our minds constantly and persuades us to take part in immoral and ungodly activities. His magic acts portray him as being all-powerful and mighty, but it’s only a trick. He’s not in charge, God is.

Start looking to the only God, whose one hundred percent authentic. Become captivated with the God who does not use tricks or illusions. Our God and Savior is the one and only true God. He doesn’t deceive, but He loves and forgive. He doesn’t work magic, but miracles instead. Get to know Him today, you’ll be fascinated with the miraculous works He’ll do in your life.

“Submit yourselves therefore to God. Resist the devil, and he will flee from you.” (James 4:7)

What, if any, place do you believe magic has in Christianity?

Amelia Brown is from the beautiful island of Jamaica. She is a 28 year old Guidance Counselor by profession, but a passionate writer at heart. Most of her articles written are aimed at stimulating positive change under the guidance of the Holy Spirit. She is also a published poet and a member of Faithwriters. Outside of writing, she enjoys volunteering, cooking, and turning frowns right side up. Amelia currently lives in New York.
@ameliambrown
Previous God’s Blessing is Stronger than any Curse
Next 3 Great Reasons to Laugh & Play Hard As a Couple