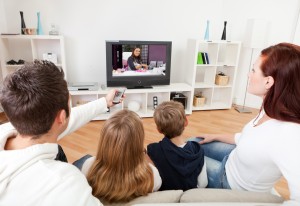 Nothing good comes to mind when one hears the words “family feud”—until the game show, that is. Steve Harvey has put a new spin on an old favorite. I’m not a fan of game shows, but this one grabbed my attention and has kept me coming back for more. It could be the craziness of the families or Steve’s comical antics, but I always get a bellyful of laughter.

“A glad heart makes a cheerful face, but by sorrow of heart the spirit is crushed” (Proverbs 15:13). It’s never a good thing when families argue or fight, and though the title of the show implies such actions, the game is anything but that. On the contrary, it’s very peaceful. Yes, two families fight to the finish line, but they’re only fighting for the best answers to questions.

Since 1976, Family Feud has been bringing families all over the world, clean wholesome entertainment. This hilarious game show is fun to watch with the whole family, especially when everyone watching is not all cheering for the same team. This may even lead to more family feuding—literally. Watching the game alone can be just as fulfilling. It’s definitely a good way to relieve stress and tension while basking in some alone time. Though some of the questions seem a little odd, most are interestingly familiar. But the most captivating part of the show is the wild, spur-of-the-moment answers the players blurt out.

The questions are great and the answers are awesome, but I believe what sets this family game show a little higher than the rest is its entertaining host. Steve Harvey is known to be an excellent comedian. He has skillfully taken his gift of making people laugh and infused it into the game show. His humor throughout the show is sporadic yet timely.

Steve’s personal story is just another example that God can save and transform anyone. “Now I know that the Lord saves His anointed; He will answer him from His holy heaven with the saving strength of His right hand” (Psalm 20:6). His humor wasn’t always family oriented, but with God’s intervention he’s now a Christian comedian. This has led him to clean up his comedic act. Still, he remains successful and productive.

Family Feud is a phenomenal game show. In today’s world of vulgar entertainment and selfish fun, it’s hard to find wholesome activities that won’t leave our souls in jeopardy. Show business rarely promotes positive family values, instead it highlights eroticism and conceitedness. There are only a handful of television programs that can be enjoyed by Christian families trying to stay faithful. Family Feud is on that meager list.

What do you think about family feud?

Amelia Brown is from the beautiful island of Jamaica. She is a 28 year old Guidance Counselor by profession, but a passionate writer at heart. Most of her articles written are aimed at stimulating positive change under the guidance of the Holy Spirit. She is also a published poet and a member of Faithwriters. Outside of writing, she enjoys volunteering, cooking, and turning frowns right side up. Amelia currently lives in New York.
@ameliambrown
Previous Christian Persecution Takes A Positive Turn
Next Entertaining The Audience That Matters Most